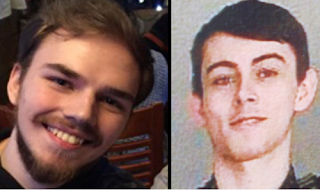 CBC is reporting that "RCMP say two men previously reported missing, Kam McLeod and Bryer Schmegelsky, are suspects in the homicides of a young couple gunned down in Northern B.C., as well as the suspicious death of a man found dead near McLeod and Schmegelsky's burnt-out truck last week." That makes more sense. However, the whole case is fishy a f*ck.

This whole case gets weirder by the minute.

Update: Post Media Propaganda is reporting that "The bodies of two B.C. homicide suspects have been found following a police hunt that lasted three weeks and stretched across four provinces. Bryer Schmegelsky, 18, and Kam McLeod, 19, were found dead in dense brush near the community of Gillam, Manitoba RCMP announced at a news conference on Wednesday. The bodies were found around 10 a.m. Wednesday, said RCMP Asst. Commissioner Jane MacLatchy. An autopsy has been scheduled to take place in Winnipeg to confirm the identities and cause of death, though police believe the bodies are those of Schmegelsky and McLeod."

That is fishy as f*ck.