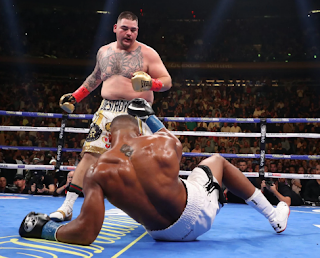 I just heard that Anthony Joshua lost his fight against Andy Ruiz June 1st. I'm shocked. The Guardian is reporting that Andy Ruiz Jr sprang one of the biggest shocks in heavyweight championship history on Saturday night when he spoiled Anthony Joshua’s US debut with a seventh-round technical knockout at Madison Square Garden.

"The unheralded 29-year-old from southern California, a replacement opponent dialled in on five weeks’ notice who went off as a 11-1 underdog, came off the floor in the third round to drop Joshua twice before the end of the frame, then sent the undefeated champion crashing to the canvas for a third and fourth time in the seventh round before referee Mike Griffin put a stop to the proceedings at the 1:27 mark."

"This was no fluke. No lucky one-punch knockout that can be explained away by a silver-tongued promoter. Joshua was outboxed, out-toughed and beaten up on a night that turned boxing’s bellwether weight class on its ear."

"The fight is considered one of the biggest upsets in boxing history, drawing comparisons to Mike Tyson vs. Buster Douglas in 1990 and Lennox Lewis vs. Hasim Rahman in 2001. Ruiz also made history as the first ever Mexican world heavyweight champion." A rematch is in the cards.

Andy Ruiz came back hard and strong after getting knocked down in the third round. They call him the Mexican Rocky. Andy Ruiz trained with Freddie Roach for seven years.