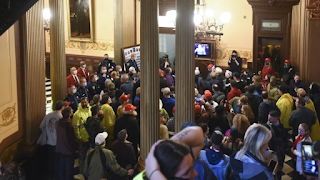 The Sydney Morning herald is reporting that "Hundreds of protesters, some armed, gathered at Michigan's state Capitol in Lansing on Thursday objecting to Governor Gretchen Whitmer's request to extend emergency powers to combat COVID-19, an appeal Republican lawmakers ignored. The protest appeared to be the largest in the state since April 15, when supporters of President Donald Trump organised thousands of people for Operation Gridlock, jamming the streets of Lansing with their cars to call out what they said was the overreach of Whitmer's strict stay-at-home order." Whitmer is a democrat trying to sabotage the American economy.

Vox is reporting that "The Republican-held legislature ultimately voted to revoke the emergency declaration Thursday as protestors looked on. Republican state legislators are now preparing to sue the governor over her shelter-at-home order." AG declares Constitution Isn’t Suspended.

Here's the deal. If Obama was the current president and he said, let's reopen the US economy, I'd say have at it. Right now, Donald Trump is president and he's saying, let's reopen the American economy. I am am saying the same thing to him as I would say to Obama if he was trying to save the American economy - Have at it. I don't agree with everything Trump says. I totally oppose his position on immigration. Canada has such a low birthrate it needs immigration to survive. Yet I completely support Donald Trumps desire to save the American economy.

The Democrats obsession to destroy the American economy and promote the UN's twisted vision of Globalism is astounding. Nancy Pelosi is an Anti Christ. Tulsi Gabard was absolutely right when she said Hilary Clinton represents the rot within the Democrat party. Sadly she was not able to see that Joe Biden is no better. Rand Paul is the real hero here. Support him.