Quebec requests military assistance for what?! 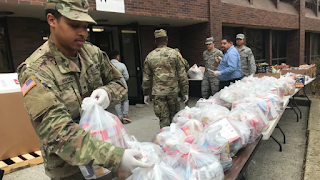 City News is reporting that "Quebec is the first province to request the military’s help to respond to the COVID-19 pandemic. Prime Minister Justin Trudeau said Friday that Rangers would be deployed to Quebec’s northern areas to help remote and isolated communities respond to novel coronavirus outbreaks. Trudeau noted Rangers would provide assistance with things like setting up tents and medical infrastructure. More details on numbers and other duties were expected later on Friday, he said. This came as the government announced it is sending $100-million in funding to organizations that provide food to the most vulnerable."

OK getting food to the most vulnerable is important. Enforcing martial law is not. My concern is the part that says "details on numbers and other duties were expected later on Friday." What other duties? This is Orwellian. The Main Stream Media is pushing panic for a reason. Their corporate sponsors have an agenda. CBS getting caught red handed trying to create mass panic by falsely claiming an overcrowded hospital in Italy was in Queens New York was criminally insane. It is a reality check for voters to question the media. Evidently, Fake News is very real.

This is a flu virus with a less than 2% fatality rate. In Canada it's a 1.2% fatality rate and that includes the elderly but it does not include the bulk of the statistics of people who get the virus and survive with mild symptoms and are therefore not allowed to get a test. I'm not saying we need to test more. I'm saying we need to calm down and think rationally.

Although the numbers are dropping in BC the Provincial government decided to extend the state of emergency to solidify the curb on cases for another two weeks. We do not therefore need more restrictions on business. We need to take a step in the other direction and let more businesses operate. Using the military to enforce travel restrictions would be an act of war.

John "Horgan also tried to reassure residents feeling stressed by the social and economic effects of the pandemic and listed the measures the province has taken to limit those effects." We can limit those effects when we let more businesses operate and let people work. Far more people are going to die from losing their jobs than from the virus.

People are more than capable of maintaining safe social distance as they get out to exercise not socialize. There was no reason to close the back country on the local mountains. People need to get fresh air. Encouraging them to hike locally will help their physical and mental health.

Rex Murphy: A COVID-19 wake-up call: Canada must stop this self-destruction. South Korea flattened the curve without a lockdown. Italy is a bad example we should not follow. CBS lied about New York. What we are doing is draconian. We need to resist Orwellian measures.

Justin Trudeau dances around at Pride Parades like he's on LSD at Woodstock. He's not the kind of guy I would take advice from during an emergency. John Horgan's minority government is hanging by a thread now that Andrew Weaver has stepped down. Just sayn.

RCMP in Alberta have rescinded a Cochrane teenager's $1,200 fine for not practicing physical distancing while in a vehicle. Two people riding in the same car. This is Orwellian. Stop it.