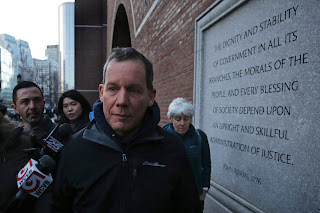 ABC is reporting that " A Harvard University professor was charged Tuesday with lying about his ties to a Chinese-run recruitment program and concealing payments he received from the Chinese government for research."

"Authorities also announced charges against a researcher at Boston University, who is accused of lying about her ties to the Chinese military. Yanqing Ye, who prosecutors say is a lieutenant in the People's Liberation Army, did work on behalf of the military while studying at the university, such as conducting research and sending documents and information to China, officials said. U.S. Attorney Andrew Lelling called the charges “a small sample of China's ongoing campaign to siphon off America's technology and know-how for its country's gain.”

“No country poses a greater, more severe or long-term threat to our national security and economic prosperity than China,” said Boston FBI agent Joseph Bonavolonta. “China’s communist government's goal, simply put, is to replace the U.S. as the world superpower, and they are breaking the law to get there,” he said. Under Lieber's Thousand Talents program contract, prosecutors say, he was paid $50,000 a month by the Wuhan University of Technology in China and living expenses up to $158,000. He was also awarded more than $1.5 million to establish a research lab at the Chinese university, prosecutors said.

"In exchange, prosecutors say, Lieber agreed to publish articles, organize international conferences and apply for patents on behalf of the Chinese university, among other things."

At first glance this simple looks like another significant step in the US China trade war. China trying to steal drug technology and patent them. The concern is the direct ties to Wuhan which granted is China's drug research centre. The concern is what the other things consist of.

ABC is also reporting that "Last month, a medical student from China was also charged in Boston with trying to smuggle vials of research specimens in a sock in his suitcase bound for China. Zaosong Zheng, who was in the U.S. on a visa sponsored by Harvard, is accused of stealing the materials from a lab at Beth Israel Deaconess Medical Center."

Great Game India is reporting that "The Thousand Talents Plan or Thousand Talents Program was established in 2008 by the central government of China to recognize and recruit leading international experts in scientific research, innovation, and entrepreneurship – in other words to steal American technology." Stealing American technology and patenting it is believable.

China didn't steal the virus from the US, they stole the vaccine.

They stole the virus from Canada and turned it into a weapon.