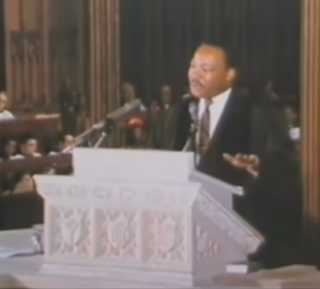 We all know of Martin Luther King's I've been to the mountain top speech which predicted his own murder. Today I want to cite a parable from his last sermon since it is just as applicable now as it was then. In that final sermon Martin Luther King quoted the Rip Van Winkle story. How when he went to sleep there was a picture of King George. Then he awoke 20 year later to see a picture of George Washington and was shocked. He had slept through the American Revolution. Dr King went on to say Don't sleep through the revolution. Those prophetic words echo today like thunder.

Right now we are under attack. We are in the middle of a Communist Revolution designed to steal our liberty and our economic stability creating global slaves of everyone. It is, as Michael Green from TBM Nation said, essential that we wake up and fight for our freedom or we will end up a slave in a new and different world. Those prophetic words echo like thunder.

Michael Green spoke about about Dr. Fauci who is an idiot that works for Communist China. Likewise Theresa Tam and Justin Trudeau also work for Communist China not for Canada. The fact that the mainstream media is playing the race card on this shows us the depth of their culpability in the COVID-19 fraud. Derek Sloan's concerns with Theresa Tam and Justin Trudeau have nothing to do with race. Derek Sloan is defending Canadian sovereignty against the UN and China's World Health Organization which is led by someone who is not a medical doctor but was a leader in a violent Communist Paramilitary organization in Ethiopia.

Kicking Derek Sloan out of the conservative party for wanting to defend Canadian sovereignty is Orwellian and is proof that the Communist corruption within Canadian politics is non partisan. After all, Justin Trudeau is in bed with Communist China but so was Stephen Harper.

Don't sleep through the revolution. Those prophetic words echo today like thunder.

The satanic slogan used to deceive the world has been Stay home save lives. That is the fundamental lie we need to confront. South Korea confronted COVID-19 without a lockdown. Now more than ever they are getting out and exercising to strengthen their immune system.

Here they would call that nonessential travel. It is essential travel for our physical health and our mental health as Dr Phil correctly emphasized. Getting fresh air and sunshine is essential to overcome COVID-19. Don't sleep through the revolution. The lies from the mainstream media are flaxen cords that keep wrapping around our neck to choke out our financial freedom from mass debt. We need to reopen our economy because we never should have shut it down.

Wade into the water. That is the only way we shall over come. Martin Luther King said the belief God will do everything for man while he himself does nothing is not faith but superstition. Faith is the moving cause of action within us. With this faith we will be able to transform the jangling discords of our nation into a beautiful symphony of brotherhood. With this faith we will be able to work together, go to jail together, to stand up for freedom together knowing that one day we will be free. Don't sleep through the revolution. Those prophetic words echo today like thunder.

Posted by Dennis Watson at 1:40 AM