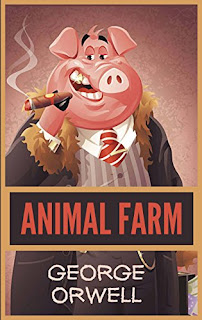 George Orwell wrote two interesting books that go hand in hand. One was 1984. The other was Animal Farm. Orwell’s 1984 is often mentioned alongside Aldous Huxley’s Brave New World for it's portrayals of a society oppressed by a totalitarian government. Animal Farm is an allegorical representation of Communism. Allegories were used since free speech does not exist under a Communist regime. Communism is the most repressive totalitarian system known to man.

The Main Stream Media likes to claim that Donald Trump's presidency is Orwellian. They have it backwards. Donald Trump is a hillbilly. They are Orwellian. As Tulsi Gabbard said, Hillary Clinton represents the rot within the Democratic party. Joe Biden is like unto her. They are both tied to the CIA which is a criminal organization deeply involved in drug trafficking ever since the Vietnam war. The CIA's infiltration of local politics is nonpartisan. The Clinton and the Bush families were both tied together within the Orwellian empire. Big brother watching you and controlling you.

CBS getting caught lying about a COVID-19 report at a New York City hospital in Queens is Orwelian. That was not an editing mistake. It was a deliberate act of fraud which forces us to examine the origin of the pandemic. Why it was launched.

The 1981 noel The Eyes of Darkness was about a pandemic launched in Wuhan that had a 100% fatality rate. The 2018 Netflix series My Secret Terrius, was about how a corona virus was used as a weapon. A terrorist tweaked the virus and changed it from a 20% fatality rate to a 90% fatality rate. Although the intelligence agencies keep twisting the global numbers, for the most part COVID-19 has a mortality rate less than 2%. We've heard of the swine flue & the bird flu, well COVID-19 is known as the Lame duck flu. Most people survive the virus with mild symptoms.

The purpose of this pandemic was to test drive medical martial law and promote Corporate Communism ushering in the Orwellian Era. More people are going to die from losing their jobs then they will from this virus. The government keeps telling us Stay home. Stop saying that. The Canadian Members of Parliament just gave themselves a raise during this pandemic.

The government should be saying if you're sick, stay home. If you're not sick get back to work. Shop. Invest in local business. The fear the mainstream media is promoting is going to create a global recession. Canadians have mobility rights entrenched within the Charter of Rights. Those rights are under attack in this fraud. The governement wants us to stay home, smoke pot and do as we're told. In Huxley's Brave New World the totalitarian government got the citizens addicted to Soma which made them obedient and complacent just like BC Bud is doing. Buyer Beware.

Facing the Fear Factor with Common sense. Do not go into debt to China over this.