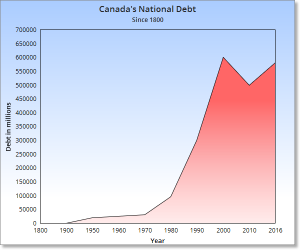 The National Post is reporting that "As the Liberal government opens the fiscal taps to combat the economic fallout from COVID-19, the federal budget watchdog is urging Ottawa to ensure that recent spending hikes do not lead to “structural and permanent deficits” after the virus has retreated. In a report on Friday, the Parliamentary Budget Officer projected that the Liberals would post a $112.7-billion deficit in 2021, not including another $25 billion announced earlier this week to expand employment insurance benefits. Wage subsidies for small businesses were also expanded to cover up to 75 per cent of payroll, adding to the fiscal weight load."

Justin Trudeau had a problem with over spending before COVID-19. One of the unnecessary side effects of COVID-19 is a fear based frenzy that throws fiscal responsibility out the window in a knee jerk reaction to shoot oneself in the foot during an emergency.

Instead of facing massive tax hikes and austerity measures after COVID-19 has retreated, we need to pause and be fiscally responsible now as we pour gasoline on a forest fire of debt that is already burning out of control. We need to get that forest fire under control. That is what we do. Nothing can distract us from that. The government needs to stop meddling in business. People need to go back to work. It's that simple. All businesses are essential services.

South Korea flattened the curve without a lock down. We should be following Korea's example not Italy's. Now people are going to be investing in their economy and so they should.

Likewise, if we can maintain business operations, we can protect our RRSPs from disappearing and from government debt exploding. That uncontrolled debt will indeed explode and collapse in on itself creating a black whole that sucks away our children's future and all of our civil liberty.

They say the Irish have heart and the British have Grit. Brits are notorious for reliability. Bombs, earthquakes or plagues will not stop them from interrupting their regular routine. We need to get back to business as usual. Schools need to reopen after spring break, the malls and restaurants need to open and we need to get back to normal. We don't need to prevent people from going to work then start printing up money and handing it out like candy. If we continue to do that we will take away incentive and our money won't be worth the paper it is printed on.

This article on the National Debt is well worth reading. It explains how Canada's massive debt was accumulated during a time of excess. The G7 "decided to resist borrowing from each of their own central banks, which offered them zero-interest borrowing, and instead, member countries were to borrow from other credit sources… sources which charged interest in a time when interest rates were skyrocketing. Prior to this agreement, Canada’s debt rose between five and ten percent per year. After this agreement, it blew up, and steadily increased over twenty percent per year until the late 80s." Who we borrow the money from is a key factor here.