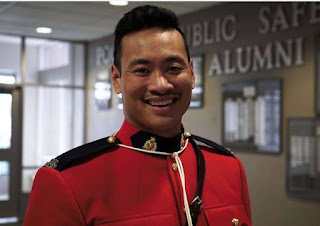 Global is reporting that "Vancouver Police have wrapped up an investigation into a string of sexual offences near an all-girls school on Vancouver’s west side last year, leading to charges against a Richmond RCMP officer. VPD confirm Andrew Seangio, 35, has been charged with seven counts of indecent acts, three counts of exposing himself to a person under the age of 16, and one count of voyeurism." That is creepy as f*ck.

"The offences took place in the area of Marguerite Street and West 32nd Avenue near York House School - an all-girls school for students from kindergarten to Grade 12 - in February 2019. Vancouver Police previously told Global News that several female students had reported a man in a black SUV pulling up beside them and exposing himself before driving away."

CBC is reporting that "Seangio is an officer with the Richmond detachment. The alleged crimes happened while he was off duty, and he is currently suspended with pay while an internal code of conduct investigation is underway. Seangio was first arrested in March 2019 after what was described as a series of indecent acts near York House School in Shaughnessy. At the time, police said he was released without charges, but required to abide by certain conditions."

Posted by Dennis Watson at 3:44 AM