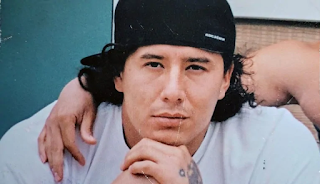 CBC is reporting that "Friends and family of an underground music artist who hanged himself at the Edmonton Remand Centre are calling for an inquiry into the events leading up to his death. Jonathan Wayne Lee Anderson was taken off life-support last Saturday at his daughter's request, His former wife was in the hospital room, and said she's also concerned about the injuries Anderson suffered before his death.

"How did it get to the point where someone would hang themselves?" Shawna Oochoo asked from her home in Regina. "I don't know exactly what occurred to him. The broken bones, the missing teeth. All of that will be in the autopsy."

'An Edmonton police spokesperson confirmed Anderson was wanted by police for a number of robberies in December 2019 and January 2020 involving firearms. Patrycja Mokrzan told CBC News that after an extensive investigation, a search warrant was executed at an Edmonton residence on Jan. 14, 2020."

"When clearing the residence, members found Mr. Anderson hiding in a confined space," Mokrzan said. "He refused to follow directions to exit from the space and an application of force was required to remove him and effect his arrest." Mokrzan said Anderson was taken to hospital for medical treatment. More than a month later, Anderson posted a message about his injuries on Facebook from the Edmonton Remand Centre."

"So now I'm sitting behind walls with a broken shoulder a ruptured bicep a torn rear delt (sic) 3 broken ribs a broken hand and missing teeth and may have lost the use if (sic) my arm because of police brutality I endured and suffered," he wrote. Oochoo said Anderson told her much the same thing by phone. "

The question is, did he really hang himslef? Edmonton is Red and White and the EPD have a bad reputation for giving the Hells Angels intel. The police claim he refused to follow directions but we all know how the cops will beat someone while screaming stop resisting even through they aren't resisting. Jonathan Anderson was a lifelong native syndicate member.