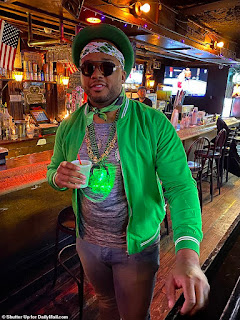 Global is reporting that "There will be no green beer flowing in downtown Vancouver on St. Patrick’s Day, after the city obtained an order requiring all bars and restaurants in the central core to close on Tuesday." This is where the government crosses the line. Common sense should prevail but the bottom line is that the government does not have the right to tell the public what they can and can't do. They work for us. We don't work for them.

The Daily Mail is reporting that "St Patrick's Day celebrations were muted across the United States over the weekend after New York, Chicago and Boston all canceled their parades while parts of New Jersey were put on lockdown. The New York City St. Patrick’s Day Parade was postponed for the first time in its 258-year history, Gov. Andrew Cuomo announced on Wednesday. Chicago, Boston, and even the Irish capital of Dublin, have also cancelled St. Patrick’s Day parades."

Well if they can cancel Vaisakhi I suppose they can cancel the St Paddy's Day Parade. We heard fireworks just after midnight last night and I figured that must have been for Vaisakhi. However, "Officials are considering a statewide curfew to help prevent the spread of the coronavirus, New Jersey Gov. Phil Murphy said Sunday morning." A curfew? AYFKM?

The Hill is reporting that "Portland, Maine, imposes curfew starting on St. Patrick's Day. The curfew will be police-enforced, with violations punishable by fines of up to $500 per day." That is f*cking insane. We elect the governments and we pay the police with our taxes. It's about time they become a little more accountable to the people who pay their wages. The police have a lot more important things to do with their time then run around and enforce curfews.

Don't get me wrong, all these young kids that get pissed drunk on Saint Paddy's day are trailer trash. It's just that the government does not have the right to tell us what we can and can't do. People need to go to work and earn a living. That is what they need to do.

As with everything, we need to balance the extremes. Panicking is pointless. Being irresponsible is unwise and this QAnon cult is ridiculous. Q is mentally retarted and so are his followers. That's all I'm going to say on the matter.