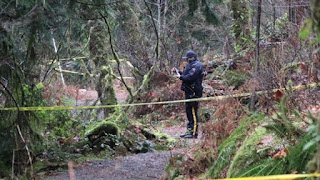 The Georgia Straight is reporting that "Coquitlam RCMP stated that shortly after 6:15 a.m. today (March 10), police were called to assist the Coquitlam Fire Department with a small but suspicious fire in the 4000 block of Quarry Road in Minnekhada Regional Park. Upon arrival, officers found evidence of a suspicious death and arrested an adult female suspect at the scene."