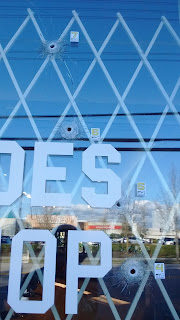 The Peace Arch News is reporting that "Surrey RCMP says shots were fired into a Guildford business overnight. Shortly after midnight on Wednesday, police received a report of shots fired in the area of 103rd Avenue and 152nd Street, according to a release from Surrey RCMP. Surrey RCMP said that patrols in the area during the initial response did not yield any evidence. (Did they get out of their car?) However, around 11:20 a.m., employees of a business in the area reported that shots had been fired into their business overnight, police said."

"Surrey RCMP said that officers went to the business and found evidence of shots fired. Photos from the scene show multiple bullet holes in one of (a local business) window. Police said they haven’t found evidence to indicate that anyone was injured in the shooting." 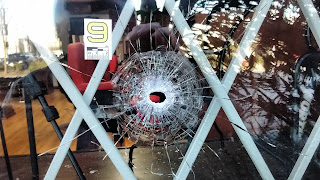 Since it's in my crib, I rode over and checked it out. There are six bullet holes in the windows marked 4 to 9 as evidence markers which implies the police found three casings that missed the building entirely. It was a pretty large caliber and I'm not even going to name the business because I don't want to glorify the Surrey Trash that did this.

They drove up to a business and shot at it in the middle of the night when it was closed. Losers. This is typical of Blaze's sh*t head friends that sell crystal meth in Guildford. Watch your back sh*theads, Blaze is in Witness Protection and all his associates are getting busted one by one.

Like that little meth head Blaze sent over to yell my name out in the middle of the night who hacked up Sean Clary's dead body. The meth head was half way down 152nd by the time I caught up with him. These are f*ck ups and we cannot let them dictate where we do business.