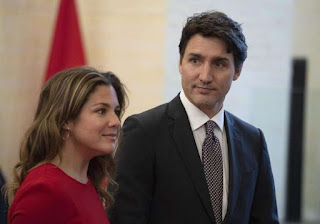 Earlier Global reported that "Prime Minister Justin Trudeau is self-isolating after his wife, Sophie Gregoire Trudeau, developed flu-like symptoms and got tested for the new coronavirus disease known as COVID-19. In a press release on Thursday, the Prime Minister’s Office said she has received a test for the new coronavirus after her symptoms emerged last night following her return from a trip to the U.K., where she had been doing speaking engagements."

Now The Canadian Press is reporting that "The Prime Minister's Office says Sophie Gregoire Trudeau has tested for COVID-19. “She is feeling well, is taking all the recommended precautions and her symptoms remain mild.”

I think a lot of people might have it and not know it because they haven't been tested and the symptoms are the same as a regular cold or flu. Nevertheless, our prayers are with the Prime Minister's wife and all those affected by the virus.

AFP is reporting that "An American woman who has recovered from the novel coronavirus has a simple message for people who are worried: Don't panic -- but do think about high-risk individuals and stay home if you feel ill." The majority of people who contracted the virus have recovered. It's mostly the elderly that are dying from it. Stay home and get plenty of rest.