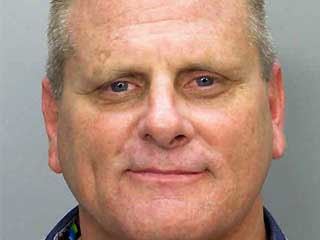 I was just going to put Hitman Jimmy Hughes in the gang member registry but there really is too much to write about him. Jimmy Hughes is a born again preacher who admits to being a hit man before he saw the light. Since then he was charged in the Octopus murders yet those charges were shamefully dropped.

It's a cold case in more ways than one but the puzzling thing is how can a Christian Minster who makes money off the fact that he admits he used to be a hitman refuse to confess to who he murdered when he was a hitman? Doesn't that mock God?

Doesn't the word hypocrite ring like a bell of warning? I had a friend who was a very witty and sarcastic Christian. He was a musician and wrote a song called Jimmy. It had profound imagery and was about a parade led by another man named Jimmy. There were three Jimmy's in his song each leading the parade. All were con men. One was Jim Jones. The other was Jim Baker and the third was Jimmy Swaggart. All three religious con men and hypocrites. No doubt we can add Jimmy Hughes to that list.

It was called the Octopus Murders because it was tied to the INSLAW affair which journalist Danny Casolaro called the Octopus. Referring to a huge organized crime ring who's tentacles spread everywhere even into government. That same journalist was murdered the day after he was given key documents exposing the Octopus.

The fact is, Jimmy Hughes was a hitman. Three people were murdered and a former Hells Angel named Glen Heggstad was accused of hiring Jimmy Hughes to commit the murder. Justice would obviously be nice but the real question is, what was the real reason they were killed? What information was the hit supposed to cover up? That is what's most significant.

OK so one source claims that William Turner worked for the IRS and had given Danny Casolaro key information about specific individuals the night before he was killed. Hmmm not likely.

Another source claims Turner was an engineer for Honeywell until it had been acquired by Hughes Aircraft. Turner alleged that he'd uncovered evidence of fraud by Hughes Aircraft, and that his whistleblowing was ignored by the Department of Defense. Casolaro seems to have thought that Hughes Aircraft might have been involved in the Octopus as well. Well that seems a lot more plausible than Bingo and the IRS.

The theatrical production "Danny Casolaro Died for You" written by Danny's cousin claims Casolaro found high level corruption in the Reagan/Bush Justice Department. Gee other than drugs, arms, murder and fraud, I wonder what that could possibly be?

Honeywell employs people in Huntsville, AL which Al Martin described as the vortex of corruption. Hmmm Hughes Aircraft is involved with Huntsville, AL as well. In fact, not only did Danny Casolaro receive death threats during his investigation, a book about his research claims he met a U.S. Army Special Forces covert intelligence officer in the very hotel room he was found murdered in. I mean sporadically decided to commit suicide in.

Inslaw Lawyer Elliot Richardson has some interesting things to say about software to die for. He cited the October Surprise and the Iran-contra scandal. Personally I think the Regan administration delaying the release of the Iran Hostages until after the election to be nothing surprising or news worthy. I think it all had to involve drugs, guns, murder and fraud. It always does.

The Octopus is a good name for it. It just goes on forever. Most people have a ten second attention span when it comes to conspiracy theories and this Octopus even overwhelms me. I don't want to minimize the death of good honorable people but unfortunately nobody really cares. It's like Catherine Austin Fitts asking a group of a hundred people who will push the big red button? Only one in a hundred would. The Last Circle - Exposing the Labyrinth has more in depth pertinent information about the Octopus.

Robert Booth Nichols had been in contact with Danny Casolaro. Nichols worked for MCA Corporation which was tied to the Gambino crime family. Thomas Gates from the FBI claimed that "high level DOJ officials were tied to illegal activities of MCA." However, it went far beyond MCA.

Michael Riconosciuto served as Director of Research for the Wackenhut facility at the Cabazon Indian reservation in Indio, California. He confirms it's all about drugs for arms. Although Michael Riconosciuto is sitting in prison I find him meticulously articulate and credible. His claims are the same claim as Gary Webb and all the others. "Who's behind this ring?"

"It's The Company. Arms get shipped to the Contras, the Afghanistan rebels [Mujahaden], the Middle East. You know, to fight the Soviet influence. But the Contras and the Mujahaden don't have money to pay for arms, so they pay with drugs, cocaine or heroin. The Company handles the drug end of it in the U.S ..."

Oh and here's some of the investment fraud that connects CIA asset Robert Booth Nichols with the Bush administration. No big surprise there. Robert Booth Nichols cheated a guy out of $10 million. That fraud was sanctioned by John P.Ellis. Ellis is the first cousin of former President George W. Bush. Seemingly Robert Booth Nichols, died in Geneva, Switzerland on February 14, 2009. Others claim he's still alive. With that kind of money involved one has to wonder about the Clinton's involvement in this whole thing as well. They were seemingly tied to the Promise software in Arkansas.

In his Grand Jury testimony, Riconsciuto says his software modifications were used to launder drug money from the Mena, Arkansas operation - as well as for secret intelligence eavesdropping purposes.