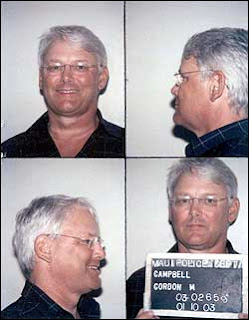 Speaking of Gordon Campbell's drunk driving charges in Hawaii, who was with him in the car anyways? There has been a lot of whispering going on about it. The first media report came out that there was a passenger in the car with him when he was pulled over for DUI yet that information was erased from subsequent reports.

One source claims that it was his Private Personal Assistant yet other reports claim it was someone else. One source claims his Personal Private Assistant had a child a year later yet other sources claim that is simply untrue. There has been a lot of speculation about the nature of his relationship with his long time advisor Lara Dauphinee.

Let's look at what we do know. We know Gordo's blood alcohol level was 0.161‏, which is more than twice the legal limit. The old legal limit not the new legal limit. Which means he had more than 8 drinks not just two.

Not only that he was speeding and nearly crossing into a lane toward another vehicle. Campbell was fined $500 for the petty misdemeanor of driving under the influence of alcohol. He also was ordered to pay $50 for failure to drive on the right side of the road, $50 for disregarding lane markings and $125 for speeding, going 70 mph in a 45-mph zone.

What I don't get is the oily skin mentioned in the police report. What on earth would cause that? Toronto mayor Rob Ford is another one of Stephen Harper's supporters.

The question I have is, why are Harper's associates such drunken pigs? OK Bruce Carson wasn't a drunk. He was just a pig and a crook.

So here we have a drunk like Gordon Campbell getting promoted to represent Canada at the 2012 Summer Olympics who changed the drinking driving laws from .08 to seize your car after two drinks.

Here we have a mayor who had a dui charge in Florida and was caught with marijuana support Harper's plan to introduce mandatory minimum sentences for the possession of marijuana.

Here we have an old pervert with a criminal record of fraud hooking up with young escorts and not only bringing them to Sussex Drive but get caught channeling money from conflicted government contracts into her account to pay for her services.

All this while Harper pimps the church and family values. It all looks so hypocritical. Sure people change but Rob Ford's assault charge against his wife wasn't that long ago. He admitted to lying about yelling and swearing at a couple while he was drunk at a hockey game in 2006. What can ya do with a drunken sailor? Give him a chauffeur in London. Now that is a travesty of justice.