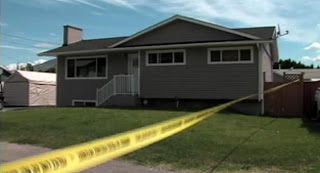 Another case of mistaken identity saw a young family targeted by home invaders early Tuesday morning, an attempt that ended in multiple gunshots being fired at their North Kamloops house.

The people who are living there now are not the people who were there two months ago. Police are now interviewing the former residents prior to the family moving in about a month ago and why four men would disguise themselves in hoodies and bandannas and pay them a visit.