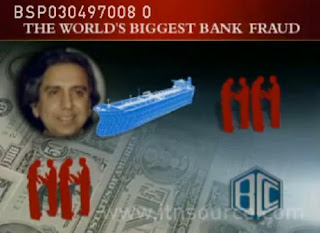 One of the more mysterious aspects of the Inslaw murders was the CIA's involvement in the BCCI Banking scandal. BCCI was known as the Bank of crooks and criminals international since it was heavily involved in laundering drug money.

I don't want to focus on Pakistan's nuclear industry. We know Canada was deeply involved in that. I want to focus on the scandalous nature of the BCCI and how it was tied to the CIA. Illegal arms, laundering drug money as well as fraud all sound frighteningly familiar to the allegations found in Al Martin's book The Conspirators.

Time Magazine reported that Sheik Kamal Adham and Sheik Khalid bin Mahfouz, head of the largest commercial bank in Saudi Arabia, were involved with BCCI scandal. I don't even have to say the name of the U.S. crime family involved with oil fraud in Texas that was tied to Saudi Arabia.

In fact Saudi arms dealer Adnan Khashoggi was tied to BCCI and had the backing of Saudi and the U.S. in Iran Contra. Which of course involved Oliver North through the front company Lake Resources.

Albert Hakim pleaded guilty November 21, 1989, to a misdemeanor of supplementing the salary of Oliver L. North. Lake Resources Inc., in which Hakim was the principal shareholder. He also pleaded guilty to a corporate felony of theft of government property in diverting Iran arms sales proceeds to the Nicaraguan contras and other activities. Hakim was sentenced by U.S. District Judge Gerhard A. Gesell on February 1, 1990, to two years probation and a $5,000 fine; Lake Resources was ordered dissolved.

Iran Contra didn't just involve Iran. It involved arms and drugs going in and out of Nicaragua. Oliver North was in charge of everything that went in and out of Nicaragua at the time. Under Richard Secord's direction of course. Lake Resources was just one of many shell companies tied to a complex maze of investment fraud. The day before 9/11 Donald Rumsfeld stated the Pentagon could not account for $2.3 trillion. Privatizing the military and removing what little public accountability there is, is not the answer, The answer is to increase public accountability.

The International Credit and Investment Corporation of Grand Caymans was termed BCCI’s “bank-within-a-bank” in the Kerry Committee report. Thus, James Bath’s Skyways Aircraft Leasing is an enterprise related to Mahfouz’s BCCI via “IC Inc.” The company was found by investigators to be at the very centre of a chart found in Oliver North’s White House safe, showing the banking network of the Iran-Contra operation.