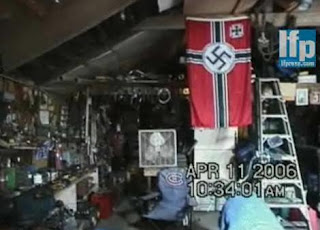 I never really clued in to the association of Outlaw Motorcycle Gangs and Nazi enthusiasts. The general public pretty much views anyone who displays a swastika as an extremist and a drama queen looking for attention. Young kids trying to go for the shock value. Wayne Kellestine liked Nazi symbols and confederate flags. He even danced a jig and sang the German anthem when he murdered the Shedden Eight. 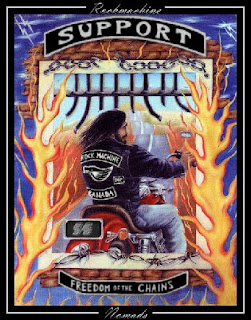 I'm kind of surprised at the Rock Machine's affinity for Nazism and the SS. On their facebook group they posted a picture of someone wearing Rock Machine colours with a SS license plate. The SS symbol isn't nearly as notorious as the swastika but it clearly represents the same thing. In fact a gumbie on the Rock Machine facebook group even used a profile picture of him wearing one of those girlie Halloween masks and a baseball cap with the SS logo on it.

Hitler invaded France. It's hard for me to understand how anyone especially anyone of French heritage would wear the symbol of the country that invaded them. It's rather bizarre.

Don't get me wrong. Germans are wonderful people. Their history and culture is much more than Adolf Hitler. Yet Hitler conned the Germans. At the time, no one really knew for sure what was happening to the Jews. First it was segregation. Then they started disappearing not to be heard from. People began to wonder but by then it was too late. What could they do? The gestapo were ruthless.

The point is, we can't blame all Germans for Hitler. Yet anyone who wears a swastika or an SS symbol now, have no excuse. They are knowingly perpetuating racism and intolerance. That is what we fought to oppose. Wearing those symbols now mocks the sacrifices our forefathers made on our behalf.

Yet the Hells Angels have even taken it one step further. They used to use the SS lightening bolt symbol on their Filthy Few patch. Until they replaced it with a skull with devil horns and the number 666. I kid you not. Grown men bragging about the number 666. Now that is really dumb. I really don't think that's something an Irish Catholic or a French Catholic would do.

Even more bizarre is the Hells Angels association with Nazi symbols and white supremacists on one hand and their exploitation of Greg Wooley on the other. They never did let Greg join the Hells Angels but they did let him join the Rock Machine so he could lead a Hells Angels puppet club called the Syndicate and the Crack Down Posse who supplied the Montreal crips with cocaine. So here we have white supremacists, exploiting someone of African ancestry and poisoning the black community in Montreal and getting rich off it. No wonder the other Haitian brothers were upset with them.