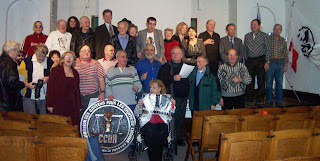 This case has nothing to do with gangs but I fund it shocking and tragic. During the reign of Quebec Premier Maurice Duplessis in the 1940s and 1950s, an alarming number of healthy children living in sanctuaries were hastily diagnosed as mentally incompetent, psychotic patients. The diagnoses were always swift — the children went to bed orphans and woke up psychiatric patients.

The reason? Shrewd fiscal planning; federal subsidies paid out more to hospitals than to orphanages. Some children allegedly endured lobotomies, electroshock, straitjackets and abuse. For the rest of their lives they would struggle to bring attention to their story and demand compensation. They called themselves the Duplessis Orphans.

So here we have a politician who wants to scam the system. His jurisdiction is provincial which orphanages fall under. Mental institutions get federal funding. So he takes these kids in orphanages and labels them mental patients to get more funding from the federal government. Not only was it a scam but it was a complete tragedy what kind of horrible things these children had to endure.

The Citizens Commission on Human Rights for Canada and the Commission for Victims of Crimes against Humanity held a press conference at the Montreal Atwater Library to demand that an independent public investigation be held to shed light on the psychiatrists behind the crimes committed against tens of thousands of Orphans.

Back in the day psychiatrists did some pretty bizarre things in the name of science. Shock therapy was horrible and I am astounded that it appears to be making a come back. Sounds more like an overture to the Rocky Horror Picture show.

That's why I'm so against the new tasers that fire an electrode into the suspect and let the police send ongoing electric currents through their body. It causes brain damage. The fact that longtime Stephen Harper ally Ken Boessenkool became a registered lobbyist of Taser International is an insane conflict of interest.

I am equally shocked that anyone with an education would cite Sigmund Freud theories as being anything but deranged. Freud was a freak. blaming problems in life on how you were toilet trained by your mother. Claiming women who were raped or abused because they secretly wanted it. His theories were anything but educated and I find it absurd individuals who like to pretend to be educated still cite his theories as though they weren't something to be ashamed of.

The current controversy with the Duplessis Orphans is the existence of a graveyard where many of the children who died were buried. The orphans' group claims children buried in an abandoned cemetery in east-end Montreal may have been victims of medical experiments performed at the old Cite de St. Jean de Dieu insane asylum, now Louis-Hyppolite Lafontaine Hospital.

Albert Sylvio, 62, was a Duplessis orphan who lived at St. Jean de Dieu in the 1950s. He said that during that time, he transported about 60 bodies of fellow orphans from the operating rooms to the basement morgue. "I undressed them and washed them and prepared them for burial," he said. "We put them in cardboard boxes. Some of them were children." He said the bodies were then taken to the cemetery and buried in unmarked graves.

A Quebec law passed in 1942 allowed the nuns to sell unclaimed bodies to medical schools for $10. Many dead orphans, whose names and identities had been changed or erased, were dissected. What was left of their bodies was buried in cemeteries such as St. Jean de Dieu.

One government registry indicates there were about 2,000 bodies buried at the St. Jean de Dieu cemetery, which locals called the "pigsty" because it was next to a hog farm owned by the nuns. At least 42 were children.

Abandoned cemeteries in New Westminster also raises concerns about similar testing of metal patients in Riverview(Essondale). We know that New Westminster had a bad reputation at the time for building on human grave sites. In fact the Picktons originally owned a hog farm right beside the Essondale cemetery.