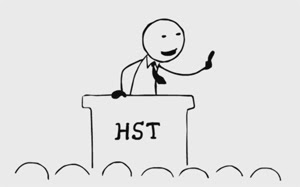 Due to the overwhelming opposition to the tax, the Liberal government has proposed a temporary reduction in the combined tax to encourage the public to vote in favour of the tax. 10 % of something that wasn't previously taxed is still a raise in taxes. There will be absolutely nothing stopping them from raising the percentage of the HST once the public has approved it.

The Tyee reports that the BC liberals have committed another $5 million to the HST add campaign. A left wing newspaper opposing government waste and raising taxes. Imagine that. Kevin Falcon said the adds will be neutral but they aren't. They are clearly slanted. The point is the government shouldn't be spending tax dollars on advertising telling us how to vote. Instead they should be listening to the voters on how to spend their tax dollars.

Vote no to the HST 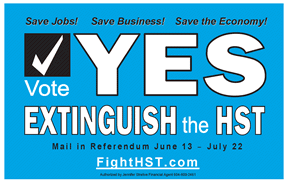