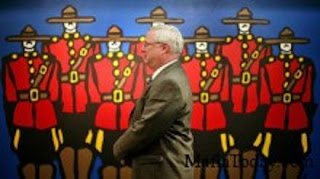 Sheriff cut backs have resulted in trial delays and adjournments. "Just days after Attorney General Barry Penner claimed there was no money to pay for more sheriffs for B.C. courts, several cases were adjourned in both Surrey and Vancouver Provincial Courts Monday because of staff shortages."

The California prisons are in complete turmoil. As a result of the three to a bunk over crowding the courts there ordered them to release one quarter of their prisoners. Only they can't remember who's in for what and aren't releasing the nonviolent offenders first they're accidental releasing violent offenders into the public.

So if our prisons are over crowded and if we are cutting down the services provided by the RCMP, how can we afford to send more people to jail for nonviolent crimes like possession of pot without raising taxes? If we spend that money on sending nonviolent criminals to jail, how can we possibly afford to imprison violent offenders and people who traffic hard drugs like crack or meth?

It really looks like the Harper government has it's priorities somewhat confused. Since the Harper government got elected on a tough on crime promise and since they bungled the anti crime bills and instead introduce an unpatriotic act that removes civil liberties while they cut funding for the RCMP, the Sheriffs and the Gang Task Forces, does that mean we can sue them for breach of contract? Didn't Jack Layton say he'd spend more money on more police? Isn't that ironic.