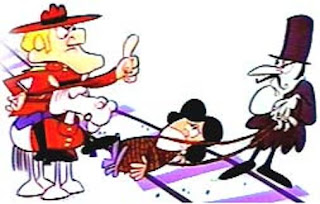 I don't want to be cynical of everyone, much, but I find it interesting that the RCMP would make news investigating the lavish spending of the G-8 fake lake party after the Harper government has dramatically cut funding for the RCMP.

Taking police officers off the street then spending $33 million on advertising to promote the RCMP brand is absolutely bizarre. Welcome to the Harper majority. We will say we told you so because we didn't vote for him.

The RCMP probe appears to be in the President of the Treasury Board's riding Tony Clement. His riding got all the handouts. Yet Clement claims the RCMP probe is just a Liberal PR stunt. Well cutting all the funding for the RCMP wasn't a Liberal PR stunt. The Harper government did that all by themselves. Comparing those cuts on one hand with lavish spending on the other hand is called public accountability and has merit when considering future elections.

The Tories claim they have done nothing wrong but I beg to differ. Cutting funding for the gang task force and taking police officers off the street then spending that money on an exclusive party and advertising is clearly a misappropriation of funds. Didn't Jack Layton say he would spend more money on more police? Isn't it ironic that someone Harper calls a socialist would be tougher on crime than he is. That sounds more like Lyin Brian to me.

What ever happened to that RCMP probe over the $9-million contract for Parliament Hill renovation that was tied to the Hells Angels? Did that ever go anywhere or did they just promote another one of the accused to the Supreme Court?