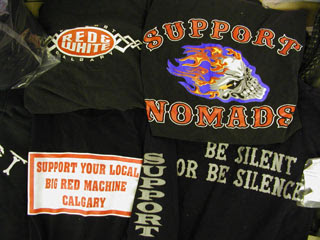 The Vancouver Province reports on a witness who recently testified at the Vernon Greeks trial in Vancouver. The level of violence is disturbing. Prosecutors say David Marnuik was beaten, tortured and then set on fire by the gang in July 2004. His body has never been found.

The witness claims Big Al said "You should see this f---ing guy. This is Internet stuff. Nine of them have been working on him for three days." This kind of violence is disturbing. I applaud the witnesses for having the courage to speak up. There is no L&R there. People don't respect that kind of violence, they fear it. There's a big difference.

The witness claims they would beat their own guys. How on earth do they think they are going to get people to love and respect them by beating their own people? If you treat your own people like garbage that is proof there is no love or respect.

We can sluff the murder off by saying he deserved it because he stole from the Hells Angels, or rather a Hells Angels affiliate group, but did he really? Isn't that excuse over used? They kill people who they claim are thieves or rats and no one gives it a second thought. Yet Geoff Meisner was not a thief and Britney Irving was not a rat. Often they lie. Usually that violence is used against rival drug dealers or people who have drug debts. In Geoff's case it could have been as simple as wanting to replace him on the Vegas money laundering run with someone who would do the same job for less money. Once they rip you off you become a liability so they do you in. No L&R there.