Conrad Black is Back in the news 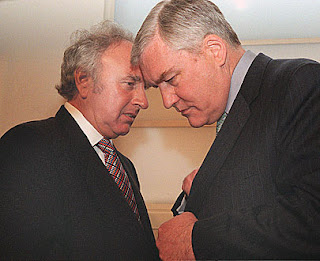 Well, the cat came back. Conrad Black is back in the news. This time he's going back to prison. There were two aspects of Conrad Black's fraud. One obviously was investment fraud. The other was media fraud. Conrad Black was a wealthy very right wing media tycoon who started buying up newspapers and media outlets.

We generally think that news is news and doesn't carry with it a political prejudice. One wouldn't think that a news outlet would intentionally print bad things about a political candidate they didn't like and selectively print good things about political candidates they do like. However, reality shows us that certain media outlets have certain political slants. One could argue the purpose of a political slant is to appeal to a certain type of reader and make more money. Another could argue that it is media controlled censorship and brain washing.

For example, it has been said that if you wrote an editorial in support of workers or organized labour when Conrad Black owned the paper, you would be fired. After all the owner of the paper can fire whoever they want for whatever reason they want.

Fox News is obviously biased. With all the money the Harper and Campbell governments are spending on dishonest adverting for the HST, we can clearly see why the Harper government would want to create his own Fox News North and have a profit making media outlet where he can get all the free advertising and brainwashing he wants. It would save him a ton on advertising.

Yet the criminal charges arise from the fact that Media tycoon Conrad Black and his allies looted the company he created to manage a global publishing empire of more than 400 million dollars since 1997, a report prepared for US court and regulators showed. The report also blamed high-profile members of the company's board of directors for rubber-stamping Black's efforts and failing to question dubious payments being made.

"Not once or twice, but on dozens of occasions Hollinger was victimized by its controlling shareholders as they transferred to themselves and their affiliates more than 400 million dollars in the last seven years. The aggregate cash taken by Hollingers former CEO Conrad M. Black and its former COO F. David Radler and their associates represented 95.2 percent of Hollinger's entire adjusted net income during 1997-2003."

The report went on to say that Hollinger went from being an expanding business -- which at the time controlled Britain's Daily Telegraph as well as the Jerusalem Post and Chicago Sun-Times -- "to becoming a company whose sole preoccupation was generating current cash for the controlling shareholders, with no concern for building future enterprise value or wealth for all shareholders."

Locally we know that David Radler, the former publisher of the Vancouver Sun and Province newspapers, had been granted full parole December 2008. He served just under 2 1/2 years for fraud.

Ralder took a plea bargain. He plead guilty to mail fraud and agreed to testify against Conrad Black. He was originally sentenced to 6 1/2 years but was transferred to a Canadian prison and released early. I'm not sure how that math worked out. Statutory release is after two thirds of your sentence has been served. Two thirds of 6 1/2 years is 4 1/3 years not 2 1/2.

Richard Perle is the former co-chairman and director of Hollinger, Inc. Perle is an American political advisor and lobbyist who worked for the Reagan administration as an assistant Secretary of Defense and worked on the Defense Policy Board Advisory Committee from 1987 to 2004. He was Chairman of the Board from 2001 to 2003 under the Bush Administration. Richard Perle was blasted for his role in the Hollinger Scandal.

James R. Thompson is a Commissioner on the National Commission on Terrorist Attacks Upon the United States. The former Republican governor of Illinois has served as a director of Hollinger since 1994. Even Henry Kissinger, Richard Nixon's secretary of state was on the Hollinger board of directors. Kissinger escaped both the Watergate and the Hollinger scandals unscathed. 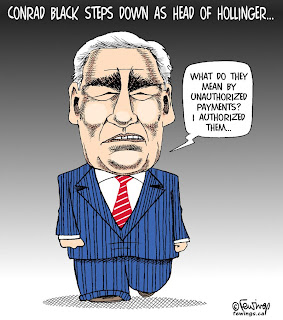 Don't get me wrong, I'm not a fan of Conrad Black. I just want to point out what he did wasn't nearly as bad as the repeated pattern the Bush family fraud did on a regular basis. In CONrad's case, he and his associates spent 95.2 percent of Hollinger's entire adjusted net income during 1997-2003.

The cartoon does represent one argument. CONrad Black created the company and it was his company to do with the profits what he wanted. Take for example if someone started a small business. Say they were building houses. If they owned the company they could spend the profits however they wanted.

The problem arises when it's a publicly traded company and you aren't the sole proprietor. You're not the only owner. Taking all the profits from the company without telling the other owners and shareholders investing in the company is considered theft. Thus CONrad's incarceration.

However, what the Bush family did on a repeated basis was way worse. According to Al Martin, Neb Bush would get him to set up a fake company. They would then commit fraud by overstating the company's value to trick investors and qualify for bank loans. Real Estate or fake Oil Companies were the most popular.

The repeated Bush Family fraud wasn't just a matter of spending the profits of a legitimate company. It involved creating a fake company, ripping off investors and ripping off banks by purposely defaulting on bank loans. Now, I will admit, not all of the Bush Fraud investors were innocent victims. Some knew the oil company was fake and they knew it was going to go bankrupt. They still invested in the venture because they believed in the cause.

They were promised 50% of their investment to be returned in dividends knowing they could write off the other 50% of their investment from their taxes and come out whole after the fact. Plus an autographed picture of George bush and a warm fuzzy feeling you were helping fight Communism in Nicaragua. By committing tax fraud but after all, in their mind the government should have been funding the contras in the first place.

So, my point is simple. What CONrad Black did was wrong and illegal. Yet it was nothing compared to the myriad of investment fraud the Bush family were involved with. CONrad spent the company's profits while the Bush crime family made fake companies, ripped off investors and knowingly defaulted on bank loans creating multiple bank crisis which had to be bailed out at the tax payers expense. All in the name of GREED. Sure the contras got a few pennies for their cause but the amount and extent of the investment fraud as well as the drug and arms dealing made many in that crime family rich.

Inviting George Bush to come to Canada to speak on the economy is absurd. He'll likely use the opportunity to set up another ponzi scheme like Bre X.