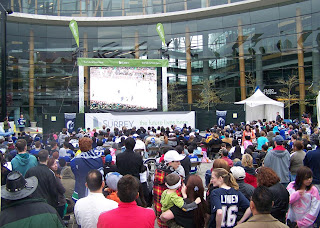 How about them Canucks?! Torres scores late in the third period to give Canucks the win in Game 1. They had the game on the big screen at Surrey Central. The game was 0 - 0 at the end of the second period. Lots of silly penalties on both sides yet both teams power plays were ineffective and the game remained scoreless.

I'm thinking to myself, the Canucks are still in this. Kesler is winning most of the face offs. No one is really dominating the game. Even if the Canucks had lost game one, they'd still be in it. They have a very real chance at actually winning the series and winning the Stanley cup for the first time in history.

Boston is a great city and I rather lose to Boston than some of the other places but that just might not happen. We just might win. Back in the day the Boston Bruins had some pretty big names like Bobby Orr when they won the Stanley cup, but we have the big names now: Kesler, Luongo, the Sedins, Bieksa.

There have been quite a few Youtube videos to get people pumped up about the series. Someone put Eminem's Lose Yourself to Cannucks footage. Someone else rewrote Bruno Mars The Lazy Song to a Canucks theme. Then there was a funny video about a Bruins fan in Vancouver that even made the paper. And of course there's Drake and the black, red, yellow. It's just a game right? Yeah right. This is history. Boston Pizza even changed their name for the playoffs.

Remember how Towel Power started? That was in Chicago. It was a protest against bad officiating. It is now a tradition. We're all pretty nervous watching the games. It's not until after the game with a win on paper that the cars start honking across the province. It's a taste of the Olympic spirit that swept Vancouver in 2010.

Interesting to note that Colin Fraser brought the Stanley cup to Surrey in 2010. He was from Surrey but actually played for the Chicago Blackhawks when they won the Stanley cup. Longtime Abbotsford resident Scott Bradley is playing with the Bruins this year.

I tell ya what's going to save Surrey. Immigration. I remember years ago when they changed the name of Whalley Exchange to Surrey Central. We all laughed and said you can change the name but you can't change Whalley. But they have. The demographics has changed considerably. Back in the day a Surrey rat was a white kid with long hair, daytons, a scruffy jean jacket and a lumberjack shirt who listened to heavy metal music. Surrey Central with the new University and all the new construction is changing. Soon it will host the new library and city hall. Sure some of the old jokes and stereotypes continue but things are changing. The future lives here. 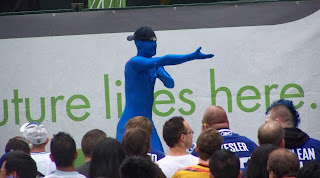 Seeing photos of a canucks jersey on the statue of Lord Stanley at Stanley park just clued me in. That's the same Lord Stanley the cup is named after. He was governor general at the time and donated a cup to be used for a championship between the various hockey teams. Indeed the cup is coming home. 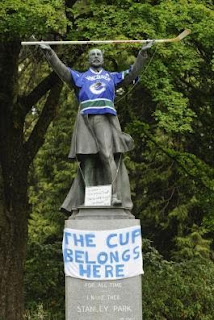