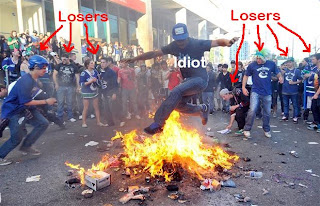 As a result we saw a change in the response by the public. The public were not cheering on the idiots who turned over cars, set them on fire and vandalized stores. The vast majority were taking their pictures and reporting them to the police. This is a good trend.

One person on facebook bragged about all the things they did that night on their facebook status. One of that person's disgusted friends took a screen clip of that childish boast and posted it on a wall for the police to see. This is the social change we need to embrace to prevent being held hostage by a mob of lawless losers. Report them to the police.

When these hillbillies break into a store or a bank and vandalize and loot it, they are stealing from all of us because the price of goods is raised to offset that loss. When they riot and vandalize things the increase policing costs us tax dollars so all that huckleberry hillbilly conduct costs us money. Do you think we are going to protect you now? Not likely. If you have pictures of people committing unlawful acts that night, submit them to the police. If you can identify anyone who was seen committing unlawful acts after the game last night, report them. That is your duty. The rats are the ones who were running around stealing from us. Only rats steal.

I will add that the vast majority of the idiots we saw causing problems last night were white trash. That is nothing to brag about. There were similar problems during the G-8 insanity in Toronto. A lot of people had a legitimate right to voice their concern and object to the extravagant waste of money on Harper's fake lake and fake promise of fiscal responsibility.

Yet the first day of the G-8 in Toronto saw many hillbillies from out of town come in and start rioting and looting. Like kids in a candy store they get all excited about the power trip from a mob and revel in their five minutes of fame compensating for their small man syndrome. We saw one real man on youtube do the right thing.

Yet the next day the police overcompensated and started beating random people who had signs instead of targeting the people they saw committing acts of vandalism. It's really not brain surgery. If you see someone throwing a rock in a store window or setting a car on fire, then you can give that person the boots and arrest him. You don't kick the cat and rob our precious civil liberties by giving random people the boots for exercising their democratic right to free speech.

In London England, they use to have a problem with football hooligans. Thugs who would exploit the mob and cause trouble. In response the police would stand shoulder to shoulder and confine the trouble makers to an area. Then they would send in the Calvary. Police on horseback that would charge in and beat the shit out of the violent thugs with truncheons. That's what I'm talking about. If you see them committing violent unlawful acts, deal with it.

When the police are caught on video beating an innocent person like Rodney King, the public are outraged. Yet people are equally outraged when idiots loot, vandalize and set cars on fire. If the public sees a violent idiot commit unlawful acts during the riot, then they see the police attack him with a truncheon, then the public cheer. It really is that simple. If you see him committing a violent crime, take him down. If he is standing there with a sign claiming his charter right, leave him alone.

Several months ago I spoke with someone visiting here from Chicago. He talked about the Chicago riots. He said he lived in the suburbs at the time and they were worried the riots would come out to the suburbs and damage their homes and property. He said they all had guns and took to the street and said if you bring that violence here, we will shoot you dead. We can argue about gun control until the cows come home. Those neighbours bringing out their long guns and standing shoulder to shoulder against the mob during the Chicago riots contained them and prevented the riots from spreading like a wild fire into the suburbs. All I know is if that kind of violence comes into my neighbourhood, my neighbours and I are not going to stand by and watch.

Posted by Dennis Watson at 8:05 AM