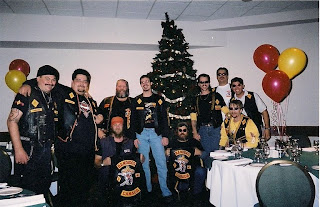 I find the Bandido massacre somewhat significant. We were all told the Bandidio massacre was because the Winnipeg Bandidos felt cheated by the Ontario Bandidos and wanted to take them over. Yet there might be more to the story than that.

The outlaw bikers gone missing and presumed dead were originally members of The Loners, a gang scattered across southern Ontario. Half of their members patched over to the Hells Angels in late 2000, which was part of a mass defection across Ontario led by a Ottawa-based Hells Angel Paul "Sasquatch" Porter. Billy Miller, who was once part of the Loners with Kellestine, went on to become president of the London Hells Angels.

But half the gang didn't want to join Hells Angels, one of the largest crime corporations in the world. Instead, they were courted over four months by a prominent U.S. Bandido to join his club. After a lot of visits, the patch over to the Bandidos was hatched in a Toronto coffee shop. Surely it wasn't the same coffee shop Toronto Hells Angel Paris Christoforou teamed up with Peter Scarcella and did the botched hit that paralyzed an innocent bystander.

Right after the Bandido massacre, the Toronto Hells Angels denied responsibility. "The Hells Angels Motorcycle Club, or any of its members, are not involved in this crime in any way shape or form. Newspaper reports and speculation to the contrary, will be proved completely wrong, in the coming days," Hells Angels Toronto told the Citizen last night.

They sure had a lot of inside information about the murder claiming that information would come forward in the coming days which would prove the Hells Angels were not involved. To me that statement sounds incredibly suspicious. How did they know information was coming forward in the near future that would apparently vindicate them? Was someone already set up to take the fall? 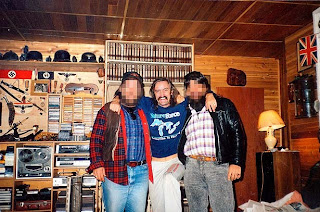 I mean like why would Wayne Kellestine join the Bandidos? He was a white supremacist who proudly displayed Nazi emblems on his farm. The Bandidos were open to Hispanics. Hence the Hells Angels skull remark about no tacos.

Kellestine danced a jig several times during the slaughter while singing the Nazi national anthem, "Deutschland über alles." Kellestine told a Jewish biker he would be killed last so he would suffer the most.

David Weiche was described as Wayne Kellestine's right hand man. David's father was also a white supremacist who ran for the Nazi party of Canada and had two kkk cross burning ceremonies on his farm. David moved to Winnipeg three months before the massacre. Three of the six accused involved in the massacre were from Winnipeg which is a huge Hells Angels strong hold. Berlin Bandidios merged with the Hells Angels.

Michael Sandham, was a former police officer and full patch member of the Bandidos who was believed to be the leader of the Winnipeg chapter. So why would two white supremacists join the Bandidios if they were a racially mixed MC? 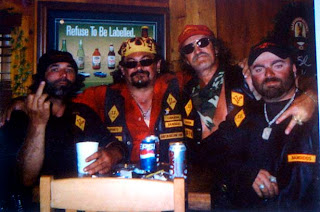 I mean let's face it. The Bandidios that were murdered were part of the "No Surrender Crew." As in they refused to give in and bend over for the Hells Angels. "IF" their murder was part of an internal cleansing does that mean the Bandidios have caved in like they did in Berlin? Or was it an infiltration and set up from white supremacists who were aligned with the Hells Angels all along?

Either way the Bandidio massacre was a huge betrayal of brotherhood that rivals the Lennoxville massacre and the Death Riders take over. The order may have come from Texas but the Hells Angels benefited from it and appeared to have fore knowledge of it. 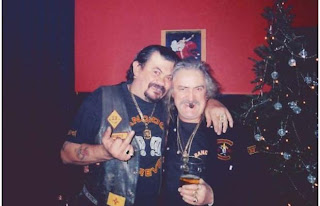 Posted by Dennis Watson at 2:29 AM

Email ThisBlogThis!Share to TwitterShare to FacebookShare to Pinterest
Labels: Bandidos