Important Lessons from the Vancouver Riot 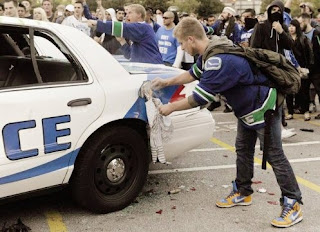 I think the first simple but important lesson we have all learned from the Vancouver riot is that the police need locking gas caps. We all do. Locking gas caps has become as important fundamental crime prevention tool as the steering wheel club.

Who would have thought it was that easy to set a car on fire. These idiots weren't using petrol bombs, they were just stuffing rags in the gas tanks and lighting them. Locking gas caps would be a simple but important deterrent.

The other good thing we learned is that bragging about that kind of stupidity will see your friends turn you in which is wonderful. Setting cars on fire, vandalizing and looting businesses is stealing from us. Nothing to brag about. Reporting those idiots is automatic.

The next step is to enforce fines and civil damages for theft or vandalism. That's an important step. If you're caught trashing something in a riot, you will be forced to pay monetary fines and damages. And if you're an employable anarchist who is out there to crush social peace while you scab off the system and live off welfare, you just got cut off and disqualified yourself for social assistance. Bye bye. Welfare is an important safety net for the down trodden, but not for those employable men who abuse the system.

The other good thing we learned is that if something bad like that happens, the public can volunteer to help clean and rebuild. Something that would take much longer and be much more expensive without volunteers. Smurfs rock.