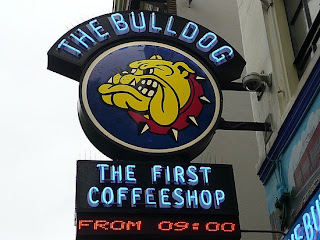 Someone claims there's a new Bulldog cafe in Vancouver run by the Hells Angels. Get this, it's across the street from the BC Marijuana Party office and is right beside the Black Door. The BCMP is of course right beside the Amsterdam cafe. Where they're too scared to sell you pot and just refer you to the Black Door across the street run by the Hells Angels.

We know that the original Bulldog Cafe started in Amsterdam in 1976. It's considered to be the first cannabis coffee shop in Amsterdam. I'm not sure if that one is run by the Hells angels but this one sure is. It has the blessing of the VPD of course. Not only are the VPD letting the Black door do business freely, they are letting them expand and sell out of their own cafe next door.

I have no problem with them selling weed or baked goods out of there but what's with all the arguing? "Tell buddy it's my block." I have a problem with the Hells angels saying no one is allowed to sell weed but them. That is so Nazi. It's shamefully suspicious that they get the green light from the VPD but no one else does. Maybe Stephen Harper will be performing there next with his pot smoking supporter Rob Ford, the new mayor of Toronto.