60th anniversary of the Korean War 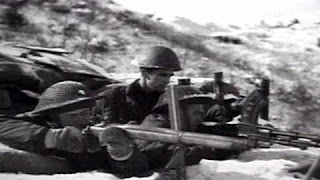 There was a very interesting documentary on Canada’s involvement in the Korean War last night called In Korea with Norm Christie. I didn’t realize it tied in with the 60th anniversary of the ceasefire. The Federal government wants to turn July 27th into a national day of remembrance. We don’t need another holiday but a day to remember courage and sacrifice is always a good thing.

"Establishing July 27 as a national day of recognition serves as a way to honour our veterans and this important moment in Canada's history," said Veterans Affairs minister Julian Fantino. "Today, Canadians will pause to remember the men and women in uniform who came to the aid of South Koreans during the Korean War." Building a monument and setting a day aside to remember veterans is a good thing. Cutting back their pensions and benefits is not.

Canada was right to participate in the Korean War. We were wrong not to participate in the Vietnam War. That is easy to see in hindsight. We can talk about the Gulf of Tonkin incident all we want. The bottom line is Chinese Communists invaded a sovereign land on both occasions. On one occasion we rose to the cause. On the other occasion, we choked and faltered.

Both wars were before my time so to speak. All I remember growing up is that the Vietnam War was bad and a lot of bad things happened. Soldiers trapped in a guerrilla war going crazy and killing innocent civilians. Vietnam was where George Bush Sr got the CIA addicted to drug trafficking. It all started with the heroin trade as confirmed by Bo Gritz. Yet the root cause of the Vietnam War was the same as the Korean War. A Communist empire invaded a sovereign land to bring it into bondage.

As we remember the Korean war we need to remember that South Korea was grateful for the Canadian support and sacrifice just like the Dutch were when Canada helped liberate them from the Nazi’s who had invaded their homeland. That is the way military intervention is supposed to be. It’s not supposed to be the invasion of sovereign states for their oil like in Iraq.

Canada was right not to participate in that invasion. Harper saying we made a mistake in that case is a huge concern. It was never claimed Iraq had anything to do with 9/11. Iraq was invaded on the premeditated lie that they had Weapons of Mass Destruction. That’s why Libby Davies went with a few others across the border to a US Weapons facility that had a big sign outside saying Warning Weapons of Mass Destruction. She asked if she could inspect that facility and was denied.

I say premeditated lie because Tony Blair was in on that mission and MI6 were caught red handed giving false information to the media in Operation Mass Appeal. That is why we cannot trust any of these intelligence agencies whenever they send out press releases. They have been caught lying. Any information they willingly give to the media is suspect.

I do think setting July 27th aside as a time to remember the Korean War is a good thing. We need to remember what military intervention is supposed to be and what it’s not supposed to be so we don’t make those same two mistakes in the future - of failing to act in Vietnam and wanting to have acted in Iraq. The latter is even more concerning because it makes us no better than the enemy.

Yet it behooves us to question military action and make our own moral decisions as to which fights to support and which invasions we should abstain from. That is what it means to be Canadian. Likewise, if China, Russia or America ever invaded Canada, we would be equally grateful to whoever came to our aid to help us repel that invasion and regain our sovereignty.