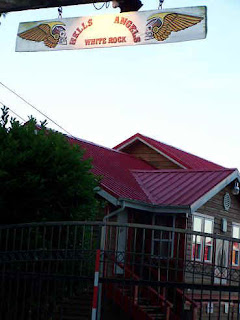 Well Kim’s back from holidays. She’s reporting that a Saskatoon Hells Angel drove off the freeway near Hope on his way home from a party at Jaba’s palace in Langley yesterday. I certainly don’t wish misfortune on anyone. Kinda strange how he mysteriously drove off the freeway into a rock wall. I have no idea if they did blood work.

Kim’s reporting that it was five years ago at their 25th anniversary she started her blog and did a live play by play coverage of the event. She was the one that noticed Scott Jamieson’s hummer from Showgirls in Edmonton showed up at the party. Has it been five years already?

I’m sure she had her blog going just before I started my web site and blog. Now five and a half years later we’re on the verge of breaking our 8 million hits mark. June 2012 we just broke 4 million hits. That makes 4 million hits in just over a year. That’s kinda hard to imagine. I recognize that the success of this blog has been from the many contributors that have sent in pictures and tips. So thanks to the many contributors over the years who actually care about their community. It gives us hope for the future.