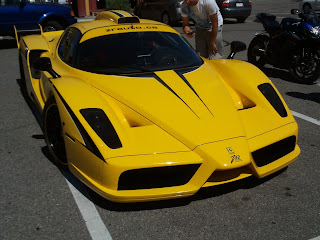 The Brandon Sun is reporting that a series of property seizures yesterday morning are related to a massive drug bust from October. In the October bust, 56 kilograms of marijuana and two kilograms of cocaine were seized along with $2 million worth of ecstasy, marijuana, cocaine and psilocybin.

Lots of names listed so I’m going to have to sort through them to determine if it was a Rock Machine bust or a Hells Angels bust. I’m told even the UN is supplying the RM out that way.

I’m told that a 2007 Ferrari is one of the seized vehicles. Since one of the suspects arrested in the October bust is from Calgary, I have to wonder if it's the Ferrari our Austin Powers friend crashed into the Atlantic ocean a while back. They do say pride cometh before the fall.