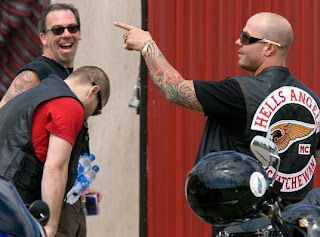 The StarPhoenix from Saskatoon is reporting that Darren Harper, the leader of a local street gang known as the Terror Squad has had his parole revoked following a hearing which exposed "direct ties" between the Terror Squad and the Hells Angles.

The Terror Squad has been described as the most dominant street gang in Saskatoon actively involved in the cocaine trade. "When crew members sell drugs, commit home invasions, robberies or other crimes, they are required to 'kick up' a portion of the profits to the council or others designated as captains, generals or higher-ups." Michael James McNab and several others were arrested in March 2011. At least we now know who is supplying their drugs.