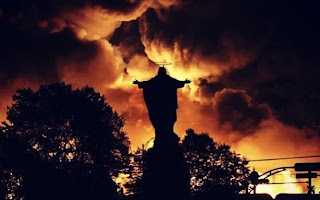 The train derailment and fire in Quebec has been a complete tragedy. The Globe and Mail is reporting that “The Transportation Safety Board of Canada has confirmed a railway employee was present at the scene when firefighters dealt with a locomotive blaze, just before the freight train carrying crude oil careened at high speeds into Lac-Mégantic and exploded.”

“The safety board's comments at a briefing in town Tuesday morning follow comments by the head of the company at the centre of the tragedy that suggested firefighters had shut down the locomotive – disabling its brakes – hours before it rolled out of control.”

Somehow we’ve gone from that to “Oh the brakes had been tampered with” and a criminal probe is under way. That’s much more believable than saying someone screwed up. Let’s even seize the day and call it a terrorist attack.

We know that when CN was privatized the greedy corporation obsessed with profits greatly reduced brake maintenance and made longer trains. Here in BC with all the mountains and hills, that meant an increase in train derailments. If that was the case, then a legal liability would naturally follow and the company certainly wouldn’t want that.

Like any serious traffic accident, before we start arguing about blame, we need to tend to the dead and injured and grieve the tragedy. In time an investigation will take place as to cause and fault. Let’s take time for due process before we jump to dramatic conclusions. When trains go fast down hills they derail because their brakes fail, not because of a fire.

Quebec police inspector Michel Forget ruled out terrorism as a cause, but said Tuesday that an array of other possibilities remain under investigation, including criminal negligence. Criminal negligence in this case would include the company laying off employees and reducing brake maintenance. After all, the president of the railway at the centre of the Lac-Megantic tragedy admitted that the handbrakes on his company's train might not have been applied properly.

The Ottawa citizen is reporting that “Burkhardt appeared to take responsibility for the disaster, saying the handbrakes might not have been properly applied on the train, a different response from previous days when the company appeared to blame firefighters.” Our condolences to everyone in Quebec who has lost loved ones through this tragedy.