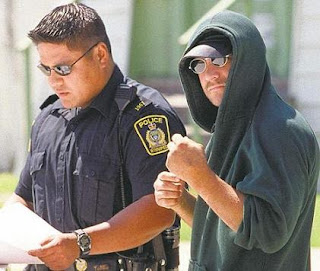 The Brandon Sun is reporting that a long time local biker named Kevin Sylvester was arrested Oct. 1 after he confronted a young family of four at gunpoint in broad daylight outside a King Edward convenience store and then chased them as the family fled in their vehicle. Sylvester followed the family, which included a one-year-old infant, in his own vehicle for several blocks, ramming it and bumping it from behind.

In the picture above he is seen making a fist trying to intimidate a photographer. The guy is an absolute nutbar. He’s like 85 pounds soaking wet. His erratic behavior is definitely overcompensating for something. In 2007 he overdosed on anti-depressants.

Sylvester is the younger brother of Darwin Sylvester, the former president of the now-disbanded Spartans motorcycle gang who were hoping to become Hells Angels. Darwin disappeared in 1998 and is presumed dead. That’s another story all on it’s own.