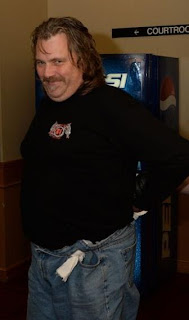 Talk about slime balls. Somebody needs to give this guy some shampoo. Greasers went out in the /50’s. He needs a belt too. What is up with those pants? Oh right, he’s in custody. They took his belt away so he doesn’t hang himself.

The Newfoundland Telegram is reporting that two men who police suspect are involved in violent activities connected to outlaw motorcycle gangs remained in custody over the long weekend. Allan Winfield Potter, 50, (the fat ass grease ball) and Bradley John Summers, 32, face assault charges and uttering threats. You can tell they're the other 1% by that goofy look in their eye. 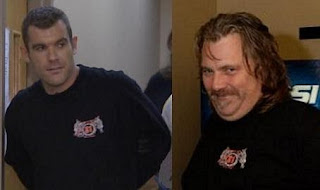 The police wouldn’t name which outlaw motorcycle gang they were with but it doesn’t take a brain surgeon to notice the Bobsy twins were wearing Hells Angels “81” support gear while in custody. The address for Summers was boarded up after being firebombed in May. Police claim the suspects are connected to a drive by shooting that happened later that day but targeted the wrong house. Brilliant. Looks like they’re getting their ass kicked from both sides. 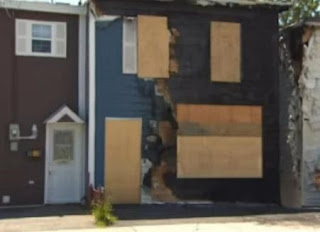 The media has picked up on the fact the accused were wearing Hells Angels support gear in court.