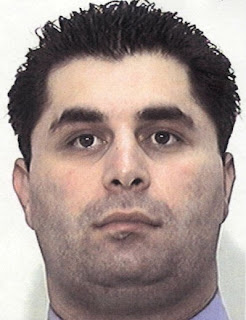 Salvatore Calautti and James Tusek were shot dead at 1:00 AM Friday morning in Toronto. The Toronto Star is reporting that the Montreal RCMP claim Calautti had rung up gambling debts with the Rizzutos and the Hells Angels, which doesn’t make a lot of sense. If he was their rival, it’s unlikely he would ring up debts with them. I’m sure gambling is a part of it, but most of these mob murders are about drug trafficking territory. The fact that he was accused of shooting Nicolo Rizzuto Sr. is a far more likely motive for his murder. Amusing how the Hells Angels support the Calabrians out of Hamilton when Vito is in prison, then kiss his ass as soon as he gets out. It appears that Montreal's mob violence is spreading to Toronto.