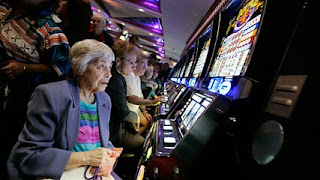 OK the last post got too long so I’ll put the second part about gambling here. Yesterday I noticed two letters to the Editor that spoke in support of an editorial the Vancouver Province ran about the government’s addiction to gambling. The letters and the editorial are sound.

In the editorial, Brian Lee Crowley points out “Knowing that the industry preys on human weakness, governments sensibly used to make it hard to gamble. Casinos were only available in distant places like Reno and Las Vegas, or restricted to private clubs to ensure that low-budget punters didn't get in to squander that week's pay.” The “Governments' insatiable search for money, born of an inability to control their own spending, unleashed a wave of state-promoted gambling dens to relieve the credulous of their cash.”

“A lot of gambling has nothing to do with the Hollywood image of tuxedoed high rollers betting vast sums on a roll of the dice. Much of it is cheap and sordid, vulnerable people enticed to throw away the rent money in the eternal quest for the Big Score.”

That is the real issue on the table – exploiting the poor and vulnerable including seniors. Which of course brings us back to Godzilla and the Gateway Casino proposal for Surrey. The residents of south surrey passionately opposed the mega casino organized crime epicenter in their community so Dianne Watts decided to build it in Newton instead. It’s not the same mega casino but it is a casino with slots targeting seniors and the poor. The affluent in south Surrey say no so the poor in Newton have no say.

Just like in Langley. Everyone showed up to oppose it and council turned it down only to slip it in one the side when no one was looking. That is exactly what Dianne Watts and the Surrey First crew have done in Newton which is where many seniors live.

I was amazed at the number of young people that came out to oppose the casino and spoke up for moral principles. It was heart warming to see. Three of those speakers stood out. There comments are posted on youtube. One young lady submitted a petition from her high school and talked about the social costs of casinos and specifically mentions suicides from gambling debts.

The second speaker said he too was an immigrant to Canada and he opposes the Casino. The third speaker from Semiahmoo started off with a quote from Leonardo Da Vinci which states “Nothing strengthens the authority so much as silence.” He said that he and his friends from Semiahmoo were there to break the silence and voice their opposition to the Gateway Casino.

All of their concerns still exist with the Gateway casino in Newton. Let’s remember that Dianne Watts supported the project all along. When she was caught lying in the press after a representative of Gateway and a local citizen proved she was lying, the paper had to print a retraction. There had obviously been discussions with Gateway about the proposal before they bought the land.

That is why Rich Coleman freaked. Godzilla choked when she saw all that opposition to the Casio. She was the chair, she wasn’t supposed to have a vote. She just breaks the tie and it wasn’t supposed to be a tie. Some of her team flipped when they saw the angry mob so she had to vote to break the tie. Everyone cheered and said she listens to the people. Yet she still slipped it in on the side in an area where the more vulnerable will be targeted.

Clearly “there is NO such thing as luck. The longer and faster you play any ‘game,’ the more money the house guarantees you will lose.” When these slots are put near seniors on fixed income it is outright exploitation. Gateway casinos don’t launder drug money but the gangs do at all the casinos in BC. Supporting these casinos is supporting the drug related gang violence that has escalated out of control over the last few years.

Since Dianne Watts can’t censor this blog like she can council, let’s ask how Gateway casinos lost $1.5 billion? When Dianne Watts said that was false, she was lying. Again. The $24,500 campaign contribution Godzilla received from Gateway Casinos was perfectly legal but totally immoral. At least our youth in Surrey have more morals than Dianne Watts does. Maybe there is hope for this world after all. I hope those young people run for council next election. They have my vote. 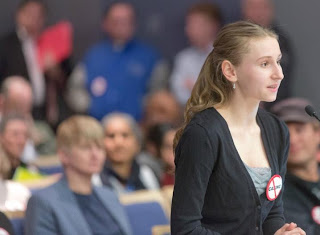