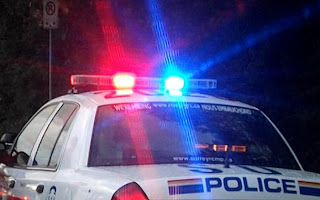 This morning as I lie in bed sleeping, I hear sirens go by. Not thinking much of it at the time, I noticed that I kept hearing them over and over again. Normally when a cop pulls someone over they have the lights and siren going until the person pulls over. Then they keep the lights on but turn off the siren. Especially in a residential neighborhood.

This was a random burst of the siren that kept going off over and over again. It was 3:30 AM when most people are trying to sleep. It started to get really irritating so I got up and went out to see what all the fuss was about. Police cars had a perimeter sectioned off with their lights on. Each vehicle would release a loud burst of their siren sporadically and repeatedly. It was impossible to sleep and it was really irritating. I started walking outside the perimeter hoping to ask a cop who isn’t in active pursuit what is with the sirens.

I walk by a few police cars on the outside of the perimeter and cringed every time the siren burst goes off wanting to ask them about the sirens but didn’t want to interrupt anyone. A female officer with a police dog is searching the area. I hear her say on her radio there’s a guy walking out here and another officer drives up to speak with me.

The cop asks me if I have seen anyone walking around about 20 minutes ago. I said no and pause for the awkward silence. I said obviously you’re looking for someone. What is the tactical advantage of the sirens? He said they want him to stay down. I assume that means they want him to stay down and hide as oppose to run away so they can find them with the dog. I walk over to a gassy hill outside their perimeter and sit down to watch the light show. The noise makes it impossible to go back to bed and sleep. I see the female officer with the dog on a very long leash searching all over and notice she crossed over and was walking past behind me.

Then all of a sudden I can hear her let the dog charge me from behind as I sit on the grassy hill watching everything. I raise my hands in the air and brace myself for the dogs teeth to sink into by back. Right before it attacks me the officer pulls the leash and shouts no then literally screams at me and shouts “What the F*ck are you doing here?!?” Those were her exact words.

I responded by saying I was trying to sleep then added I don’t understand what the tactical advantage of the sirens is. Then as she walks away I state in absolute bewilderment this is very unprofessional.

I watch her handle the dog from a distance. Pulling the dog shouting f this and f that. It didn’t look like the dog had a scent and was following it. It didn’t look like she really knew how to handle the dog either. Then she came up to speak to two other officers. One was in an unmarked car with a dog in it. He seemed a lot more calm and competent. She had calmed down considerably and they were discussing what she had seen.

As I just shook my head it made me think of a scene from the movie Men in Black where Will Smith was in a target practice drill. It was a funny scene from a comedy. Yet it showed that law enforcement does have a difficult task pursuing suspects in a world full of bad guys, good guys and innocent bystanders.

At first I thought, welcome to Surrey but then I remembered the Prince George lockdown and how this could happen in any residential neighborhood anywhere in Canada. It is important to be appreciative that the police are in fact willing to chase down bad guys. I do however think it’s important to address police arrogance and stress the importance of preserving the Charter of Rights in our society when the police are paid by civilian taxes to serve and protect them. Not to control, harass and abuse them. No one has the right to run around like Gestapo and trample our civil liberties.