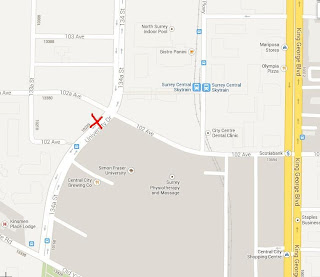 I had heard that someone shot at a cab in Surrey Saturday night but I didn’t realize it was at Surrey Central right behind the SFU courtyard where those wackos stabbed a guy in the neck with a kitchen knife and started kicking him on the ground after he dropped like a sack of potatoes. That one didn’t appear to be gang related. It just looked like a group of losers who jumped a smaller group of people after a fight at a bar.

This cab shooting sounds a bit different as well. The bullet went through the rear windows. After the shooting, the suspect drove off and the passengers fled. It’s likely the shooting was targeted at the passengers of the cab. The couldn’t have been very high lever drug dealers if they were riding in a cab. Unless they were being responsible and took a cab home after a night out drinking. The passengers were two couples so that’s entirely possible. One would hate to think it was just another group of wackos that shot someone for an altercation at a club.

Kim Bolan is reporting that the police haven't even found the passengers of the cab yet and are asking for the public's help to identify them.