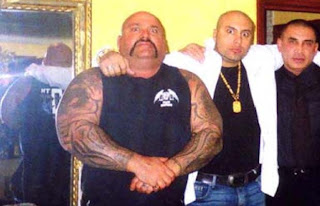 Kim Bolan has been doing some pretty rock solid reporting on the UN murder trial while I was away. I have a bit different spin on it but she was present in court and described some of the new facts presented. The big news is that five members of the UN gang pleaded guilty on Monday to their involvement in what Kim describes as a 14 month campaign to murder the Bacon brothers which culminated in the Kelowna shooting that killed Jonathon Bacon and wounded Larry Amero.

The five guilty pleas included Barzan Tilli-Choli and Karwan Ahmet Saed who were in the car with Sarah Treble (who shared a car lease with Larry Amero) and Nicola Cottrell when they tried shooting the Bacon brothers outside Tbarz in Surrey. Which is still owned by White Rock Hells Angel Randy Jones. Well, he finally took the strip bar out of his mother’s name and called it Shakerz so they don’t seize it in the US indictment, but he still owns it. He’s just gone from the White Rock chapter to the Surrey girl chapter along with Larry Amero and the Chipmunks. Someone has to run the business for those idiots.

Another member of the fantastic five who pleaded guilty on Monday was the star of the Romanian Strazile, Ion Kroitoru aka K-9. The former wrestler who was involved with the shooting of the guy who was borrowing Jamie Bacon’s car to fix the stereo. He killed the guy borrowing Jamie’s car instead of Jamie. That was a real tragedy indeed. K-9 was the first person that came to my mind when the Kelowna shooting occurred. Only he was incarcerated at the time so that ruled him out. I think K-9 was there when Michael Plante and the Hells Angels got their ass kicked in Brandi’s.

The fact that the UN and the Bacon brothers were killing each other in the Vancouver gang war is nothing new. The war between the UN and the Red Scorpions broke wide open when the Bacon dirt bags conspired to commit the Surrey Six where two innocent victims were killed so they couldn’t be witnesses. At the Surrey Six the Bacon brothers took over the Red Scorpion gang which used to be affiliated with the UN and made them affiliated with the Hells Angels. That is what started the war.

I don’t see it as Clay being obsessed with a monopoly on the drug trade. I see it as the Hells Angels continuing their obsession with a monopoly on the drug trade. Only the fact that the Hells Angels were supplying and supporting the Bacon garbage didn’t become public knowledge until the Kelowna shooting where Larry Amero came out of the closet with his relationship with Jonathon Bacon and as he was loud and proud bragging about it right before he was shot. They do say pride cometh before the fall. Getting shot by an idiot like Klun Klutz has gotta be embarrassing.

The revelation was that the Hells Angels were supplying and supporting the Bacon dirt bags all along. Only at the time they were lying about their support of the Bacon brothers and were using the UN until they were all arrested. That is how they do business. The 2009 shooting of the two Hells Angels supporters from Kamloops in Mexico happened after the two UN members Elliott Castenada and Ahmet (Lou) Kaawach were gunned down in Mexico back in 2008. That was tied to Bandgera Gold which was charged with laundering money for the UN. Even when that was going on, Hells Angels were involved with the directors of that company trying to take it over from the inside. Slimy backstabbing dirtbags. Salih Abdulaziz Sahbaz from the UN was then gunned down in Mexico January of this year. He had taken over for Elliot.

I said from the beginning of this blog and web site after the Surrey Six, the Hells Angels have been the driving force behind the Vancouver gang war all along. Demonizing the UN isn’t going to change the fact that the Hells Angels won and took over the drug trade in BC through deception, lies, murder and betrayal. We all know any monopolies in any market is not a good thing. Whether it be a corporate monopoly of the oil industry consumed in greed or the Hells Angels violent control of the drug trade. It’s all bad. Just ask Ashley Machiskinic and Janice Shore.

One blog reader pointed out that the Outlaws claim to have two chapters in Alberta. One in Edmonton and the other in Cypress county. We recently heard that the police made an arrest in Alberta of suspects who they claimed were members of the Outlaws MC. That is, the Outlaws MC not just members of an OMG. Alberta would be considered Western Canada. Kinda like what Alex Caine said that everyone was freaking out about. Me thinks they doth protest too much.

Update: Evidently the murder trial has produced wire taps of Clay ordering the Bacon brothers murder. The fantastic five have been accused of murdering Bobby DeGeorgio and Jessica Amber Illes who were likely selling for the Bacon Brothers or the Independent soldiers who in turn work for the Hells Angels. Robert Carr personally posted on Bobby Degeorgio's RIP page. Carr was convicted in the Safi kidnapping with Thomas Crawford.

The UN targeted HA affiliated dealers as Karwan Saed said “they were hunting us, we were hunting them.” Since the police are so determined to actively hunt down and lock up every Hells Angel rival in the Vancouver drug war, why don’t they give a rat’s ass about the murder of Lindsey Buziak? Looks like the Hells Angels have still won this violent monopoly on the drug trade in BC. I can't even list all the causalities of their monopoly. Let's start with the brutality of Big Tony.

Barzan Tilli-Choli is to be deported to Iraq after serving his 14 Year sentence. Dan Russell killed Jonathan Barber, Croituru's lawyers were successful in removing the Barber murder charge from Croituru's list. Croituru wasn't convicted in that murder.