This song is for all the undecided 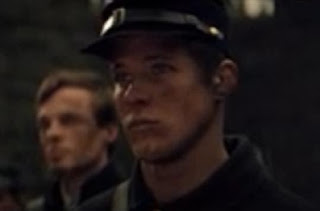 There’s a popular song on the radio called Some Nights by Fun. It’s got a catchy beat just like Stomp by Serena Ryder. Yet when I listen to the words of the song, it’s something that I can’t personally relate to although my heart feels for. One of the lines in the chorus reads what do I stand for? I don’t know. Not knowing what I stand for is something I’ve never had a problem with. Yet in a world of confusion and deception it’s easy to see how someone could feel that way.

The music video takes place during the American civil war and shows a young soldier amidst that conflict wondering what side he should be on. For me the American civil war was pretty cut and dry. Good versus evil. Right versus wrong. Those who supported the constitution and those who opposed it. Some claim it was about independence versus national amalgamation but ultimately it was about slavery. Do you support or oppose slavery?

A few years ago a brother from Boston wrote a humorous rant about a modern political conflict entitled F*ck the South. He referred to the American civil war and said let them separate. Who wants to be part of a nation with people who are willing to fight a war for the right to own and keep slaves? F*ck them.

Although some claim there were other issues on the table, ultimately it was about slavery and I have to agree. Who would want to be part of a nation with people who are willing to fight a war over the right to have slaves? In today’s day, we are heading toward another civil war - Truthers and Debunkers. Those who support the principles in the constitution against those who oppose the principles in the constitution. For me personally, the issue is crystal clear. There is no question in my mind which side I stand on.

Although the Truther movement is growing in North America, everywhere truth is, there is opposition to it. Slander and deception continuously try to suppress truth leaving many people confused about which side to join. All I’m saying is question things. Don’t believe anything anyone says blindly without thinking about the moral ramifications. In the gang war, don’t believe everything the Hells Angels or the police say without thinking about it first.

In the modern false flag era, realize that false flag attacks are part of our world history. It’s what Hitler used to deceive the German people. It’s what George Lucas used to explain how a slimy Senator took over a free Republic and turned it into a Galactic empire.

In our era conspiracy theories have gone well beyond theories. Operation Nothwoods was very real. That needs to be addressed. Like the boy who cried wolf, it doesn’t mean that every act of terror is a false flag attack. It does however mean we need to consider that possibility in our list of suspects. Especially when they want to use these false flag attacks to take away our liberty and destroy the principles in the constitution our forefathers fought and died for.

So today I dedicate the song Some Nights to all the undecided. We are definitely heading toward another civil war and the real issues of that war are being hidden by a web of lies. Although the Truther movement is passionate and rising, Debunkers are everywhere trolling the internet and spamming forums with lies and rationalizations trying to destroy the constitution and everything it stands for.

It’s like Martin Luther King’s observation that it’s still a tragedy of human history that the children of darkness are frequently more determined and zealous than the children of light. Yet be aware that despite how loud and proud the Debunkers spam the internet, if we open our eyes and part the veil like Elisha did years ago, we can clearly see they that be with us are more than they that be with them.

For me, I know what I stand for. For you, don’t believe everything I say. Just think about it. Question things and ask if it passes the test of believability. Does it make sense? Is it consistent with the known facts? Is it believable? Don’t believe anything the Intelligence agencies say because they are compulsive liars whose mandate is murder to get gain as they rob the people of their liberty and enslave the masses. Once again this conflict is about slavery and supporting the principles of the constitution just like in days of old. The south will rise again but the north will stand strong and free. Just as always.

I’m an old man now. I’m not like K’naan in his song like a waving flag which was a popular theme song for the world cup in soccer and is another catchy tune. When I get older, I won’t be stronger, I’ll be six feet under. When I get older it will be time for me to pass on the torch and let someone else carry the flame in their hearts and eyes. Changed men and woman can change the world. They set on fire those around them because they themselves are on fire. Gentlemen may cry peace peace but there is no peace. The war has already begun. I know not what course others may take but as for me, give me liberty or give me death.

So, for all the undecided out there, this song’s for you. As for the Debunkers and the Surrey Pressure cooker bomb plot, sorry Holmes, you’re just unbelievable. Word.

On a lighter note, here are two from my son. The first is Gollum singing Trouble by Taylor Swift. The other is Gollum and Gandalf reading the Bohemia Rhapsody. As for me, I’m taking the kayak to a place Where the Streets have no name. Now that’s what I’m talking about.

Posted by Dennis Watson at 4:53 AM