I saw this post referring to the Rolling Stone article on Clay Roueche. They compared Clay to Pablo Escobar and it made me think about the Pablo Escobar story. My daughter just mentioned it last night while we were at an awesome little Mexican restaurant in Surrey.

Googling Pablo Escobar led me to the Ramon Milian story. Another CIA drug smuggler tied to Iran contra. He was considered Pablo Escobar’s right hand man. So here we have more drug dealers working for the CIA, betrayed by the CIA and serving life in prison for them just like Noriega. It’s all recorded in the Kerry committee. Frontiline has a video of Ramon Milian Rodriguez testifying at the Kerry committee. Felix Rodriguez was another one who worked for the CIA. It’s not that the war on drugs failed. It’s just that the CIA was on the wrong side of that war.

Although I hesitate demonizing the UN when it’s clear their violence was in response to the Hells Angels violence, I think prosecuting one without prosecuting the other is treason. I have heard of IHIT members claiming that everything was fine until they started going after the Hells Angels. All the small groups were much worse then them. That is so untrue. IHIT members who really believe that need a career change because they are on the wrong side.

Recently I heard a young choir sing a stunning remix of Coldplay’s Viva La Vida. Theirs was based on a German remix but they tweaked it a bit themselves. I hadn’t paid too much attention to the lyrics in the original Viva La Vida. I thought the line in the chorus that said For some reason I can’t explain I know saint Peter will call my name. The remix really emphasized the original says won't call my name which when you read the rest of the lyrics, makes much more sense. The guy had lived a dishonest life.

I have more compassion for Clay than I do for David Giles yet I am concerned that people don’t start idolizing the bad that Clay did. Right is right and wrong is wrong. Crack and crystal meth are horrible drugs. Slinging those evil drugs just so you can drive a new SUV is the epitome of greed. Everything that Confucius, Taoism and Zen teach against. Clay showed compassion to help his friend get off crack but profited from many others' miserable addictions.

When I think of the Coldplay remix, I think of David Giles. The fallen hobo clown who used to rule the underworld. Never an honest word was ever heard when he used to rule that underworld. For some reason I can’t explain I know saint Peter won’t call his name. Anyone can change but we need to start somewhere. If we don't try no one can help us. It all begins with uttering an honest word. Facing the truth. That is the first step on the road to redemption. 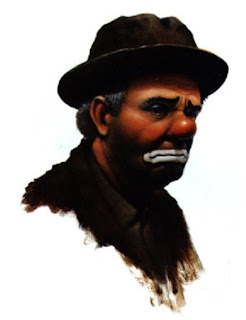