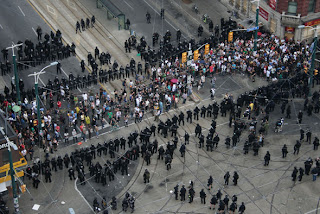 The other night CBC reported the findings of a study into police violence at the G20 summit on the National. CBC’s report seemed more realistic. Recently other versions of the report were discussed claiming the police did no wrong. Those reports claimed that the only real concern was about the use of corralling which is against RCMP policy but since the Toronto Police were in charge it was used.

Corralling means you corner protesters without giving them an exit. It was used quite effectively in England for many years. The police would line up side by side and confine strikers or protesters. Then they would send in police on horseback to beat the tar out of them with truncheons.

The violence at the G20 summit and the way the police handled it represent two distinct concerns. First was the crazy violence. Waco’s exploited the moment and started looting. That has nothing to do with a lawful protest. The next day the police over reacted and kicked the cat by attacking peaceful protestors which was just plain wrong.

There are many valid concerns about the G20 summit. Big corporations ripping off taxpayers is but one example. The ridiculous expenses of the Fake Lake Summit by a fake conservative government pretending to be fiscally responsible. The right to lawful assembly is a fundamental right in a democratic society. Removing that right is a huge concern. Logic dictates that we need to crack down on violence and looting not peaceful protests. 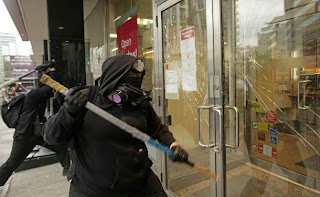 Just like in Montreal. The students are behaving like spoilt brats. You can't outlaw lawful assembly but you can outlaw breaking windows and vandalism. That already is against the law. We need to stop kicking the cat. 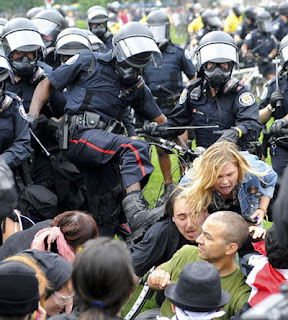