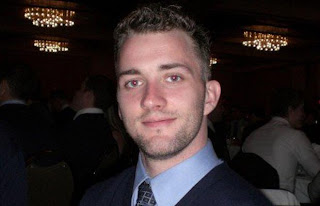 A former University of B.C. rugby player has lost his appeal of his conviction of the murder of a Vancouver prostitute. In October 2009, a B.C. Supreme Court jury found Andrew William Evans, 27, guilty of second-degree murder in the August 2007 slaying of Nicole Parisien, 33.

Evans, who confessed to police that he found Parisien's sex-for-hire services on Craigslist, paid $200 to have sex with her at a Kitsilano highrise following a night of heavy drinking at the Roxy nightclub. The accused became angry or hurt after he couldn't achieve an erection and hit Parisien and then strangled her. He dragged her body down five flights of stairs and into some bushes. At trial he argued that he was heavily intoxicated at the time of the killing and lacked the necessary intent for murder.

It is yet another tragic case of the murder of another Vancouver prostitute. Being drunk is not just cause for committing murder. It also shows that murder is not an act that you find on the path to peace and enlightenment. There is no happiness in murder.

All of us are free to make choices and all of us have to live with the consequences of our choices, good or bad. Consequences aren’t always bad. The decision to have children, as challenging as that may be, can give one’s life a deeper meaning.

That’s not the kind of thing a guy is going to brag about. Even in prison. So what are you in for? I paid for a prostitute and couldn’t get it up so I killed her. Other inmates would be like seriously? Dude, there are pills for that. They’re not going to say good for you that bitch probably deserved it. They’d be like what a complete loser in every sense of the word. Sad.