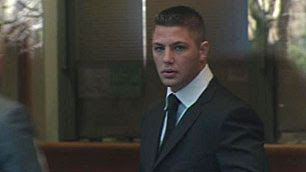 Jarrod Bacon has been sentenced to 12 years in prison for drug conspiracy charges. His brother Jonathon was gunned down in Kelowna with Larry Amero and his other brother Jamie is on trial for his involvement with the Surrey Six Murder. Jamie was also an associate of Kevin LeClair. Kevin was shot dead and trained at Revolution in Langley which has ties to the Hells Angels.