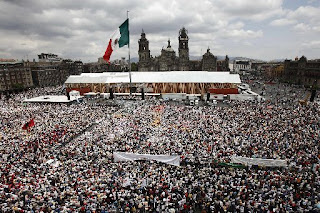 49 bodies discovered in Mexico near the Texas boarder. Many bodies were decapitated with limbs removed. The inhuman gory nature of these murders continue to increase as these sub humans continue to revel in their depravity. Decapitations, bodies hanged from bridges or dumped in public places. The news had the audacity to ask if the Mexican presidents’ war on drugs has been worth it as though confronting evil is somehow to blame for evil.

The victims were alleged to have been members of a drug cartel and were murdered by a rival drug cartel. They are fighting over the drug profits. It is a war of greed. As long as we allow the public sale of crack we are feeding that greed. As long as we let crack dealers sell crack in public, people will fight over the money to be made. The only way to stop the violence is to stop the public sale of crack.

We also need to open our eyes and look at the root of the problem. Which brings us to our Operation Fast and Furious podcast. Operation Fast and Furious was where government agencies sold guns to the Mexican cartels and brought back tons of cocaine as payment. It ran from 2009 – 2011 under the Obama administration. Operation Wide Receiver did the same thing from 2006 – 2007 under the Bush Administration. The common element is the involvement of the CIA. To understand the future, we have to go back in time. We need to look at Mena Arkansas, Nicaragua Contras, and the Heroin trade during the Vietnam War.

Here’s a conspiracy theory for you. Obviously the CIA were selling the cartels guns and trafficking ciociane to make money. Don’t you think they are also trying to discredit any presidential candidate who wants to keep Mexico’s oil public? The current president tried to privatize their oil but the Mexican people protested in mass and that plan was stopped. Now we see new presidential candidates are supporting the privatization of Mexico’s oil. Nationalized oil drives the old companies crazy. They will do whatever they can to get their greedy little mits on that money. We saw it in Afghanistan.