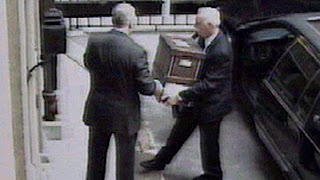 Speaking of fraudsters and criminal diseases, CONrad black is finally getting released from prison. Harper is welcoming him in to Canada despite the fact that he gave up his citizenship and has a criminal record. Why not? After his right wing takeovers of all the media outlets, perhaps Harper will put him in charge of his own Fox News North. Better yet, since Stephen Harper likes to surround himself with fraudsters with criminal records perhaps he'll give CONrad Black Bruce Carsons old position as senior advisor. After all, Harper pulled a few strings for the RCMP to over look Bruce Carson's criminal record for fraud, why not Conrad?

W5 did an interview and shocking episode on Conrad Black the other night. The only thing truthful in that interview was Conrad black’s arrogance. The news isn’t supposed to be spin. It is a shocking reminder of how tainted the news really was when Conrad Black was busy buying up all the media outlets in a monopoly of censorship.

At one time Conrad Black even owned the Vancouver Sun and the Vancouver Province. The one common occurrence when he acquired news outlets is how biased the reporting became in those various outlets. Layoffs and downsizing were common place in acquisitions and mergers. Many claimed that if you ever wrote an pro labor editorial, You were first in line for a lay off.

No doubt certain newspapers have certain biases. It’s called supply and demand. They want to appeal to a certain type of reader so they print editorials geared to that political way of thought. It’s also a great way for a complete wacko to practice censorship in a modern world that guarantees free speech.

Conrad Black coming back to Canada? God help us. That is the last thing we need. That’s like promoting the book cooker from Enron to the book cooker of the Pentagon. All the fraud and embezzlement aside, that is one guy that needs to trim his Groucho Marcs eyebrows. Meryl Normans may well me an extreme but that is just plain nasty.

He was forced out of the global media empire he'd built out of his Toronto offices in 2003 after shareholders accused him of engaging in a $500-million "corporate kleptocracy." U.S. prosecutors charged Black and his associates with skimming some $60 mil-lion from his global newspaper empire between 1999 and 2001.

They were ultimately convicted of stealing $6.1 million by awarding them-selves tax-free bonuses from news-paper sell-offs without the approval of the board of the Hollinger holding company. He served 29 months of a 78-month sentence when the U.S. Supreme Court tossed out the "honest-services" law that had formed the basis of his 2007 conviction, and was released in 2010 while his case was re-examined by the courts.

Conrad Black was convicted of Fraud. After multiple appeals the US Supreme court tossed out the "honest-services" law that had formed the basis of some of his 2007 convictions but not all. The Supreme court tossed out the law. Can you believe it? Black has always said he did nothing wrong. He was the CEO. He was of the opinion everything the company owned, was his. He stole from the company. It wasn't OK just because he was the CEO. He wasn't the owner, Shareholders owned the company. This guy is a fraud and he should not be allowed back into Canada. Harper welcoming him back in is a disgrace. Let's make Harper legally liable for the next taxpayer bailout Conrad Black incurs.