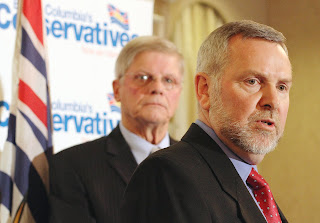 John van Dongen applies for intervener status into corruption court case. Interesting. Monday he applied to be a party to a court case launched by the auditor-general, who is trying to find out why the two defendants in the B.C. Rail corruption trial had their $6-million lawyer fees paid for by B.C. taxpayers.

Van Dongen, MLA for Abbotsford South, left the B.C. Liberals in March, citing the decision on the legal fees for ministerial assistants David Basi and Bob Virk, as one of his main reasons for leaving. Van Dongen has every right to be concerned. The subsequent editorial in the Vancouver Province explains why.

It gives the outrageous example of how a woman in his riding was completely shafted. She's a disabled mom who lives with her disabled son on a small disability pension. The woman's brother, who lives in Alberta, recently decided to give her a used car to make her life a little easier.

But then the B.C. government demanded she pay $700 in taxes on the gift. When she couldn't afford that, she tried to give the car back to her brother, but the government said she still owed them the money. "She came to my office a couple of times, completely distraught," van Dongen told the columnist. "We tried for weeks to get her some help, with no success."

First of all, the woman shouldn’t have had to pay $700.00 for a gift in the first place. Making her pay after she returned the gift was absurd. Compare that to the $6 million those same people blew on a couple of idiots who plead guilty in the BC Rail case is astounding.

Holding a public inquiry as to why they paid Basi Virk’s legal fees is pretty pointless. We all know it was a scam. They proclaimed their innocence to stall it off and as soon as Gordon Campbell and some other high ranking members of the party were going to be implicated, they copped a plea to censor the evidence. Yet it’s a court hearing not a public inquiry. Perhaps some of the missing evidence can be recalled.

This is just another example of the kind of heartless extremes that we need to address. Letting the rich pay zero tax while the poor have to make up the difference is wrong. Making these huge tax dollar expenditures to cover up fraud is outrageous.

The BC Rail case was bad enough. Selling public assets to your friends who profit from the taxpayers loss and in return give the corrupt politicians a kickback. Nothing surprising or earth shattering there. Just like Harpers conflicted Jets. It’s not surprising but it is wrong.

As bad as the BC Rail case is, despite the fact that Gordon Campbell was going to be implicated along with Christy Clark and her brother, that is just the tip of the iceberg. The real dilemma of the BC rail fraud was the reason the RCMP got a search warrant in the first place. Because of Basi’s ties to his cousin who was convicted of cocaine trafficking. It was a huge operation. Bassi was accused of money laundering through real estate. Those charges never happened after they copped a plea. Clearly the depth and extent of the BC Rail fraud still needs to be examined.